A new paper published in Quaternary Research reconstructs sea levels of the Persian Gulf over the Holocene (past ~10,000 years) and finds sea levels were more than 1 meter higher than the present during the mid-Holocene from "5290 to 4570 years ago, before falling back to current levels by 1440 to 1170 years ago."

The sea level reconstruction shows no correlation to CO2 levels over the Holocene, corroborating many other papers demonstrating CO2 levels do not affect sea levels. 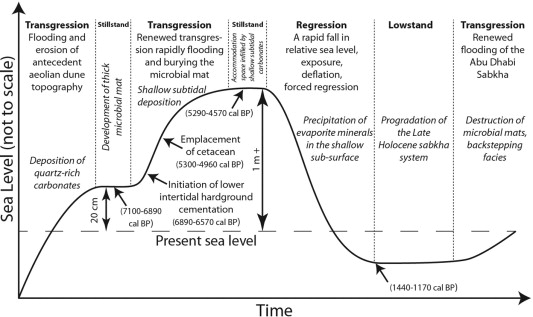 Late Quaternary reflooding of the Persian Gulf climaxed with the mid-Holocene highstand previously variously dated between 6 and 3.4 ka. Examination of the stratigraphic and paleoenvironmental context of a mid-Holocene whale beaching allows us to accurately constrain the timing of the transgressive, highstand and regressive phases of the mid- to late Holocene sea-level highstand in the Persian Gulf. Mid-Holocene transgression of the Gulf surpassed today's sea level by 7100–6890 cal yr BP, attaining a highstand of > 1 m above current sea level shortly after 5290–4570 cal yr BP before falling back to current levels by 1440–1170 cal yr BP. The cetacean beached into an intertidal hardground pond during the transgressive phase (5300–4960 cal yr BP) with continued transgression interring the skeleton in shallow-subtidal sediments. Subsequent relative sea-level fall produced a forced regression with consequent progradation of the coastal system. These new ages refine previously reported timings for the mid- to late Holocene sea-level highstand published for other regions. By so doing, they allow us to constrain the timing of this correlatable global eustatic event more accurately.
Posted by MS at 12:24 PM