Climate scientist Roger Pielke, Sr has noted that land surface temperature records (which comprise the vast majority of temperature records prior to the satellite era (1979-)) are unreliable due to land use changes and urban heat island effects, and that we should therefore look to ocean heat content changes as the most reliable metric for assessing global heating and cooling. The oceans cover 71% of the global surface area and hold at least 1000 times more heat than the atmosphere. Many have claimed that the 'missing heat' from 'anthropogenic global warming' has gone into the oceans, even though the heat seems to be 'missing' from the oceans as well. Recent data from the ARGO network of ~3200 floating robot sensors has shown that since full deployment of the system in ~2003, the ocean heat content has declined despite steadily rising 'greenhouse' CO2 levels:
How could this be? Here are the physical reasons why increasing concentrations of 'greenhouse gases' would not be expected to increase ocean heat content:

1. Infrared radiation from 'greenhouse gases' causes evaporative cooling of the oceans rather than heating
CO2 and other 'greenhouse gases' re-emit radiation to the Earth and space in the long-wave infrared (LWIR) portion of the electromagnetic spectrum. While ultraviolet and visible radiation from the Sun does penetrate the surface of the oceans to cause heating, the energy output of the Sun is relatively stable and obviously not linked to man. However, since the LWIR re-radiation from increasing 'greenhouse gases' is only capable of penetrating a minuscule few microns (millionths of a meter) past the surface and no further, it could therefore only cause evaporation (and thus cooling) of the surface 'skin' of the oceans. Stephen Wilde, LLB (Hons.), Fellow of the Royal Meteorological Society explains this in detail, excerpted below:


"However the effect of downwelling infrared is always to use up all the infrared in increasing the temperature of the ocean surface molecules whilst leaving nothing in reserve to provide the extra energy required (the latent heat of evaporation) when the change of state occurs from water to vapour. That extra energy requirement is taken from the medium (water or air) in which it is most readily available. If the water is warmer then most will come from the water. If the air is warmer then most will come from the air. However over the Earth as a whole the water is nearly always warmer than the air (due to solar input) so inevitably the average global energy flow is from oceans to air via that latent heat of evaporation in the air and the energy needed is taken from the water. This leads to a thin (1mm deep) layer of cooler water over the oceans worldwide and below the evaporative region that is some 0.3C cooler than the ocean bulk below."

The recent paper by Roy Clark, PhD also discusses the physics and concludes, "Application of Beer’s law to the propagation of solar and LWIR [long-wave infrared] flux through the ocean clearly shows that only the solar radiation can penetrate below the ocean surface and heat subsurface ocean layers. It is impossible for a 1.7 W.m−2 increase [predicted by the IPCC due to man-made greenhouse gases] in downward ‘clear sky’ atmospheric LWIR flux to heat the oceans." (p. 196). Increasing levels of IR-active 'greenhouse gases' would instead be expected to cause increased evaporative surface cooling of the oceans. N.B. there is also a negative feedback phenomenon on CO2 levels discussed in a paper published in Nature which shows that the evaporative cooling of the ocean 'skin' from increased downwelling IR allows increased uptake of CO2 due to increased solubility of CO2 at lower temperatures.

2. Even if 'greenhouse gases' were capable of heating the oceans, the ocean heat capacity is so immense that there would be no significant change in ocean temperature
The huge mass and heat capacity of the oceans regulates and stabilizes global temperatures to a far greater degree than any possible influence from mankind.
The immense heat capacity of the oceans can be illustrated by assuming the oceans could be heated one-way by all solar energy absorbed by the Earth, and assuming no cooling due to convection, evaporation, or radiation. The oceans hold 1.3 billion cubic km of water. Assuming the density is 1 kg per liter, the mass of the oceans is 1.3 billion billion kg or 1.3 yotta grams. The total solar power absorbed by the Earth in one year is 89 peta Watts (PW):

For a thought experiment, assume all 89 PW are taken up by the oceans and that the oceans don't release any of that heat. That would add 0.67 yotta calories to the 1.3 yotta grams, resulting in an increase in the ocean temperature of only 0.5C after an entire year.
Now, let's also assume that the IPCC is correct that 'greenhouse gases' are causing 1.7 W/m2 'radiative forcing,' and that it is possible for this IR 'back-radiation' to penetrate and heat the ocean (even though we've already shown that is impossible above). The 1.7 W/m2 works out to 850 Tera watts (TW) [or .85 PW] when multiplied by the total Earth surface area of 500 tera square meters. Thus, the IPCC claims that 'greenhouse gases' are preventing .85 PW of energy from leaving the atmosphere to space. This .85 PW is less than the 89 PW from the Sun by a factor of 105 times. Plugging this into our thought experiment above shows that the change in ocean temperature from 'greenhouse forcing' would be 0.5C/105 or .005C in one year or only 0.5C after 105 years, assuming the oceans release none of this added heat!  In reality, of course, the oceans would release all or most of this added heat by convection, evaporation, or radiation, leaving at most only a few hundredths of a degree temperature change after 105 years. Thus, it is impossible for 'greenhouse forcing' to raise ocean heat content to any measurable degree, or cause melting of the icecaps from below, or increase sea levels from thermal expansion.


Related:
1. The latest Chilingar et al paper also discusses heat capacity of the atmosphere, which should decrease due to added CO2: "saturation of the atmosphere with carbon dioxide, with all other conditions being equal, results not in an increase but in a decrease of the greenhouse effect and average temperature within the entire layer of planet’s troposphere. This happens despite intense absorption of the heat of radiation by CO2. The physical explanation of this phenomenon is clear: molecular weight of carbon dioxide is 1.5 times higher and its heat-absorbing capacity is 1.2 times lower than those of the Earth’s air. As a result, the adiabatic exponent for a carbon dioxide atmosphere, at the same all other conditions, is about 1.34 times lower than that for a nitrogen–oxygen humid air"
2. Another empirical analysis which finds increased CO2 leads to increased cooling
3. Sea surface temperatures have been on a long-term decline since the Medieval Warming Period (~1000 years ago),  Roman Warming Period (~2100 years ago), and Egyptian Warming Period (~3100 years ago): 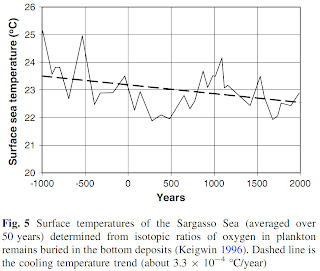 4. NOAA says the oceans are the drivers of global temperature, not the land surface.
5. Dr. Pielke asks whether James Hansen's GISS model should be rejected as unskillful.
Posted by MS at 10:00 AM