A new article published by the Washington Post titled No, the sun isn’t driving global warming attempts to discredit Dr. Willie Soon's peer-reviewed, published research papers, some of which have demonstrated solar influences upon climate. The article does not cite nor provide any scientific rebuttal whatsoever to any specific scientific paper written by Dr. Soon, nor to any of the hundreds of other peer-reviewed published papers demonstrating a solar-climate relationship and potential solar amplification mechanisms.

Instead, the author cites the repeatedly-debunked and simplistic propaganda attempting to dismiss the role of the Sun in climate change promulgated by the warmist Skeptical Science website.

The global warming "pause" began almost simultaneously with the current lull in solar activity, while atmospheric CO2 levels continued a steady rise. Even the IPCC, which formerly completely dismissed the role of the Sun in climate change was forced to admit in the latest assessment report that low solar activity is one potential explanation (of at least 66 others) proposed as a cause of the 18+ year "pause" of global warming. It is nonsense to claim that solar activity only significantly affects climate when temperatures are steady to falling, but not while temperatures are rising.

The Washington Post article below also claims the solar activity of the late 20th century was not exceptional in comparison to the past millennium, a claim which is refuted by multiple proxy reconstructions including:

The article also attempts to dismiss solar effects upon climate by claiming the 0.1% change in solar output over a solar cycle is insufficient to force global temperatures. This simplistic analysis conveniently ignores hundreds of peer-reviewed papers describing potential solar amplification mechanisms, which suggest how tiny changes in solar output may be amplified by many potential mechanisms and secondary effects to produce large-scale changes in climate.

In sum, the attempts by warmists to dismiss the role of the Sun in climate change are based upon oversimplified and elementary analyses which conveniently ignore hundreds of peer-reviewed papers finding an increase of solar activity over the 20th century to a solar "Grand Maximum" at the end of the 20th century, solar-driven ocean oscillations -which have profound and lagged effects upon climate, and many other solar amplification mechanisms described in the literature, all of which provide plausible mechanisms and explanations for all or most of the global warming of the 20th century, as well as the current 18-year global warming "pause."


Analysis: Solar activity & ocean cycles are the 2 primary drivers of climate, not CO2

Despite all the attention to who funds him, it is important to note that much of the controversy here is about Soon’s actual scientific views. While Soon has challenged the conclusions of other climate and environmental researchers on subjects ranging from the vulnerability of polar bears to the planet’s climate history, one of his principal arguments has long been that variations in the behavior of the sun, rather than human caused greenhouse gas emissions, are the central factor driving climate change.

Thus the Heartland Institute, a conservative think tank that lists Soon as one of its experts, calls him “a leading authority on the relationship between solar phenomena and global climate.” In a recent Heartland Institute report, Soon and a co-author wrote that “The Sun may have contributed as much as 66% of the observed twentieth century warming, and perhaps more” — going on to suggest that global cooling may lie ahead, due to the “recently quiet Sun and extrapolation of solar cycle patterns into the future.”

This “it’s the sun” claim is an extremely popular argument with climate change doubters — according to the website Skeptical Science, it is the second most popular anti-global warming argument of them all, second only to “climate’s changed before.” So is there any truth to it? After all, regardless of who supports his research, if Soon is actually right on the substance then we may be getting all worked up about global warming for nothing.

Certainly, the argument that the sun — rather than carbon dioxide pollution — is driving global warming cannot be dismissed out of hand. After all, if there is indeed significantly more solar radiation coming in to the Earth, that would definitely raise the planet’s temperature (and vice-versa). The sun is, after all, where we get most of our energy from. Thus, the argument is at least physically plausible.

However, the idea that the sun is currently driving climate change is strongly rejected by the world’s leading authority on climate science, the U.N.’s Intergovernmental Panel on Climate Change, which found in its latest (2013) report that “There is high confidence that changes in total solar irradiance have not contributed to the increase in global mean surface temperature over the period 1986 to 2008, based on direct satellite measurements of total solar irradiance.”

The IPCC “basically says that global warming is not caused by the sun,” says Gerald Meehl, a senior scientist at the National Center for Atmospheric Research. “The strongest evidence for this is the record of satellite measurements of solar output since the late 1970s that show no increasing trend in solar output during a period of rapid global warming.” 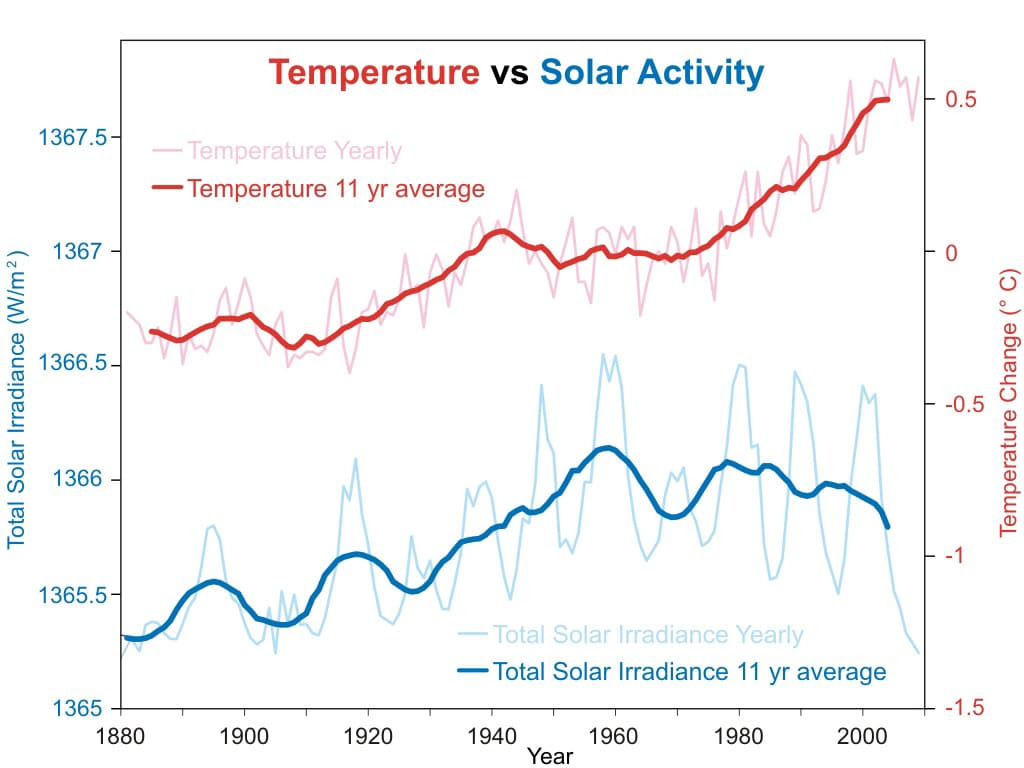 The sun’s output clearly does vary, as you can see above. For instance, scientists have identified an 11 year sunspot cycle, and found that at the maximum point for sunspots in the cycle, total solar irradiance is indeed somewhat greater than at the minimum. This can have regional effects on the Earth’s climate, says Meehl. “There is evidence for a solar effect in some regions,” he says, “but not a strong global signal over the era of reliable satellite measurements.”

It isn’t only the IPCC that concludes this. “No satellite measurements have indicated that solar output and variability have contributed in a significant way to the increase in global mean temperature in the past 50 years,” concluded a recent workshop report from the National Academy of Sciences. The report noted that while the 11-year sunspot cycle can lead to changes in total solar irradiance of as much as .1 percent, that only translates into a “few hundredths of a degree centigrade” temperature response on the Earth.

“Clearly the sun matters and if it varied a lot then there would be consequences, but it doesn’t,” explains Kevin Trenberth, a prominent climate researcher who is also at the National Center for Atmospheric Research. “The variations are only order 0.1%.”

Of particular significance is the fact that solar irradiance has not shown an increasing trend over the past several decades, while global temperatures clearly have.

A recent scientific review article on climate and the sun similarly notes “the lack of detection of an underlying irradiance trend in the past three decades,” and concludes, in rather strong terms, that:
Claims that the Sun has caused as much as 70% of the recent global warming … presents fundamental puzzles. It requires that the Sun’s brightness increased more in the past century than at any time in the past millennium, including over the past 30 years, contrary to the direct space-based observations. And it requires, as well, that Earth’s climate be insensitive to well-measured increases in greenhouse gases at the same time that it is excessively sensitive to poorly known solar brightness changes. Both scenarios are far less plausible than the simple attribution of most (90%) industrial global warming to anthropogenic effects, rather than to the Sun.

So in sum: It’s not that the sun can’t influence climate. It can, and it does. And climate scientists have accordingly been studying the influence of the sun for many years.

And they have found that, while the sun certainly is not irrelevant, the case for steadily rising carbon dioxide as the principal factor driving the current warming trend just makes a lot more sense.


Willie Soon and some other climate change doubters would surely argue back against this finding — but it’s a strong consensus finding, as shown above. The weight of expert opinion isn’t with these doubters — but the burden of proof most definitely is.
Posted by MS at 7:11 PM