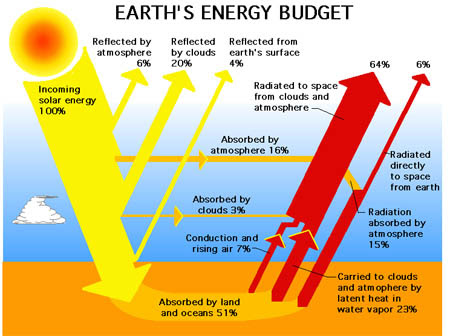 Whereas, the latest IPCC report shows greenhouse gas back radiation to represent 95% (324 W/m²) of the total incoming radiation (342 W/m²) from the sun:

Back radiation shown as 324 Wm-2 at lower right
Since heat is radiated from "greenhouse gases" in all directions, not just back to the earth, if the energy back radiated is 342 Wm-2, then an equal amount must also be radiated by GHGs to outer space (omitted from IPCC diagram), which would imply GHGs are radiating nearly double the energy input from the sun (i.e. a perpetual heat engine). Thus, the GHG "contribution" is off by a factor of two. The IPCC manages to "balance" it's unphysical energy budget via a number of arbitrary fudge factors which allow a large range of possible scenarios. This effectively "covers all the bases" and allows undue flexibility of computer models to derive any desired result due to greenhouse gas concentrations.
Posted by MS at 10:20 AM