Facts don’t support his hypothesis, so he shouts louder, changes subjects and attacks his critics

By Willie Soon and István Markó

True science requires that data, observations and other evidence support a hypothesis – and that it can withstand withering analysis and criticism – or the hypothesis is wrong.

That’s why Albert Einstein once joked, “If the facts don’t fit your theory, change the facts.” When informed that scientists who rejected his theory of relativity had published a pamphlet, 100 authors against Einstein, he replied: “Why 100? If I were wrong, one would be enough.”

In the realm of climate scientism, the rule seems to be: If the facts don’t support your argument, talk louder, twist the facts, and insult your opponents. That’s certainly what self-styled global warming “experts” like Al Gore and Bill Nye are doing. Rather than debating scientists who don’t accept false claims that humans are causing dangerous climate change, they just proclaim more loudly:

Our theory explains everything that’s happening. Hotter or colder temperatures, wetter or drier weather, less ice in the Arctic, more ice in Antarctica – it’s all due to fossil fuel use.

Climate scientism aggressively misrepresents facts, refuses to discuss energy and climate issues with anyone who points out massive flaws in the manmade climate chaos hypothesis, bullies anyone who won’t condemn carbon dioxide, and brands them as equivalent to Holocaust Deniers.

In a recent Huffington Post article, Mr. Nye “challenges climate change deniers” by claiming, “The science of global warming is long settled, and one may wonder why the United States, nominally the most technologically advanced country in the world, is not the world leader in addressing the threats.”

Perhaps it’s not so settled. When the Australian government recently shifted funds from studying climate change to addressing threats that might result, 275 research jobs were imperiled. The very scientists who’d been saying there was a 97% consensus howled that there really wasn’t one. Climate change is very complex, they cried (which is true), and much more work must be done if we are to provide more accurate temperature predictions, instead of wild forecasts based on CO2 emissions (also true).

Perhaps Mr. Nye and these Australian researchers should discuss what factors other than carbon dioxide actually cause climate and weather fluctuations. They may also encounter other revelations: that climate science is still young and anything but settled; that we have little understanding of what caused major ice ages, little ice ages, warm periods in between and numerous other events throughout the ages; that computer model predictions thus far have been little better than tarot card divinations.

As for Nye’s assertions that “carbon dioxide has an enormous effect on planetary temperatures” and “climate change was discovered in recent times by comparing the Earth to the planet Venus” – those are truly bizarre, misleading, vacuous claims.

The relatively rapid increase in atmospheric CO2 over the last 30 years has produced only 0.2°C (0.4°F) of global warming – compared to a 1°C (1.8°F) total temperature increase over the past 150 years. That means the planetary temperature increase has slowed down, as carbon dioxide levels rose. In fact, average temperatures have barely budged for nearly 19 years, an inconvenient reality that even the IPCC (Intergovernmental Panel on Climate Change) now recognizes.

This is an “enormous effect”? By now, it is increasingly clear, the proper scientific conclusion is that the “greenhouse effect” of rising atmospheric carbon dioxide is very minor – as a recent article explains. Mr. Nye and his fans and fellow activists could learn a lot from it.

Objective readers, and even Mr. Nye, would also profit from reading a rather devastating critique of one of The Scientism Guy’s “science-is-easy” demonstrations. It concludes that the greenhouse effect of CO2 molecules is of course real, but Mr. Nye’s clever experiment for Al Gore’s “Climate Reality Project” was the result of “video fakery” and “could never work” as advertised. When will Messrs. Nye and Gore stop peddling their Hollywood special effects?

For that matter, when will they stop playing inter-planetary games? Mr. Nye and the popular media love to tell us that carbon dioxide from oil, gas and coal could soon turn Planet Earth into another Venus: over-heated, barren, rocky and lifeless. Princeton Institute of Advanced Study Professors Freeman Dyson and Will Happer show that this is utter nonsense.

For one thing, Venus is far closer to the sun, so it is subjected to far more solar heat, gravitational pull and surface pressure than Earth is. “If we put a sunshade shielding Venus from sunlight,” Dr. Dyson notes, “it would only take 500 years for its surface to cool down and its atmosphere to condense into a carbon dioxide ocean.” It’s not the high temperature that makes Venus permanently unfriendly to life, he adds; it’s the lack of water.

Second, the amounts of atmospheric carbon dioxide are grossly disproportionate. Earth has barely 0.04% carbon dioxide (by volume) in its atmosphere, whereas Venus has 97% and Mars has 95% CO2. Mars much greater distance from the sun also means it has an average surface temperature of -60°C (-80°F) –underscoring yet again how absurd it is to use planetary comparisons to stoke climate change fears.

Third, Earth’s atmosphere used to contain far more carbon dioxide. “For most of the past 550 million years of the Phanerozoic, when multicellular life left a good fossil record, the earth’s CO2 levels were four times, even ten times, higher than now,” Dr. Happer points out. “Yet life flourished on land and in the oceans. Earth never came close to the conditions of Venus.” And it never will.

Fourth, Venus’s much closer proximity to the sun means it receives about twice as much solar flux (radiant energy) as the Earth does: 2637 Watts per square meter versus 1367, Happer explains. The IPCC says doubling atmospheric CO2 concentrations would be equivalent to just 15 W/m2 of additional solar flux. That’s nearly 100 times less than what Venus gets from being closer to the Sun.

Fifth, surface pressure on Venus is about 90 times that of the Earth, and strong convection forces increase the heating of surface air, he continues, making Venus’s surface even hotter. However, dense sulfuric acid clouds prevent most solar heat from ever reaching the planet’s surface. Instead, they reflect most sunlight back into space, which is “one of the reasons Venus is such a lovely morning or evening ‘star.’”

Of course, none of these nerdy details about Earth-Venus differences really matter. We already know plant life on Planet Earth loved the higher CO2 levels that prevailed during the Carboniferous Age and other times when plants enjoyed extraordinary growth.

However, even burning all the economically available fossil fuels would not likely even double current atmospheric CO2 levels – to just 0.08% carbon dioxide, compared to 21% oxygen, 78% nitrogen, 0.9% argon and 0.1% for all other gases except water vapor. And doubling CO2 would get us away from the near-famine levels for plants that have prevailed for the past tens of millions of years.

Carbon dioxide is absolutely essential for plant growth – and for all life on Earth. Volumes of research clearly demonstrate that crop, garden, forest, grassland and ocean plants want more CO2, not less. The increased greening of our Earth over the past 30 years testifies to the desperate need of plants for this most fundamental fertilizer. The more CO2 they get, the better and faster they grow.

More than 70% of the oxygen present in the atmosphere – and without which we could never live – originates from phytoplankton absorbing carbon dioxide and releasing oxygen. Keep this in mind when Bill Nye The Junk Science Guy tells you carbon dioxide is bad for our oceans and climate.

Dr. Willie Soon is an independent scientist who has been studying the Sun and Earth’s climate for 26 years. Dr. István Markó is a professor of chemistry at the Université Catholique de Louvain in Belgium and director of the Organic and Medicinal Chemistry Laboratory. 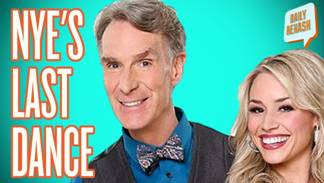