Economist: Green energy cannot be defended as a source of jobs 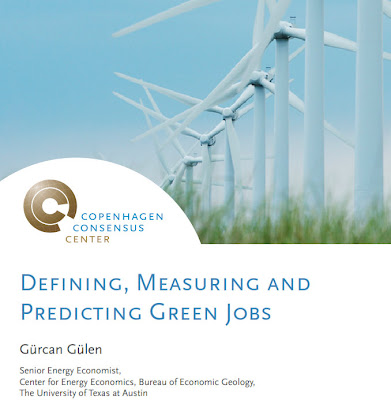 Although there was not a single mention of "climate change" in the 2011 State of the Union address, President Obama touted 'green' energy as "an investment that will... create countless new jobs for our people." However, a recent study by Senior Energy Economist Gurcan Gulen of the Center for Energy Economics, University of Texas, concludes "that adding 'net jobs' cannot be defended as a benefit of investing in green energy" and that aggressive promotion of these technologies will negatively impact purchasing power, employment and GDP.

The study finds that the "realities of the global energy scene are:

• Most green technologies are far away from the scale that is needed to replace conventional fuels in a significant way. Although it is reasonable to expect improvements in technology and cost structure in the future, it is difficult to predict the development path that can be included in modeling exercises.

• These technologies are more expensive than conventional technologies and hence need subsidies, tax incentives and mandates to gain market share (some more than others). A carbon tax could level the playing field for wind at about $20-$30 per ton but needs to be much higher for solar and other technologies. [n.b. carbon credits were selling for $0.05 per ton on the Chicago Climate Exchange prior to its closure]

• They face integration problems due to their intermittency, immaturity of technology, scalability limits, inability to communicate with existing infrastructure, and other technical or power market economics constraints.

• Consumers, especially at the residential level, are often reluctant to adopt new technologies if they are not certain they will get the same benefits as those from current technologies and even more reluctant when it comes to changing their energy consumption behavior, which is often based on habit rather than conscious decision making.

• Pushing aggressively to increase the share of these technologies, though clearly possible, will cost large sums of money and will increase cost of energy to society, negatively impacting purchasing power, employment and GDP.

One cannot simply wish these realities away."