The IPCC predictions of catastrophic global warming climate change are entirely based upon computer models programmed on the basis of unverified, and in most cases, false premises. Unlike any other area of science, climate computer model results are considered gospel without verification by empirical data or proper consideration of the huge uncertainties and limitations of modeling a chaotic system in which almost all of the variables are poorly understood. Climate science has become perverted to the point of considering models to supplant empirical data


“People underestimate the power of models. Observational evidence is not very useful,” adding, “Our approach is not entirely empirical.” John Mitchell, principal research scientist at the UK Met Office

The recent empirical observations showing that the Sun is entering an exceptionally low period of activity were immediately 'countered' by the climate alarmist community trumpeting a computer model to supposedly prove negligible effect of a Grand Solar Minimum upon climate. This prompts a list of the top 10 reasons why climate model predictions are false:

1. Even the IPCC admits the climate models have not been verified by empirical observations to assess confidence. The fine print of the IPCC 2007 Report contains this admission:


Assessments of our relative confidence in climate projections from different models should ideally be based on a comprehensive set of observational tests that would allow us to quantify model errors in simulating a wide variety of climate statistics, including simulations of the mean climate and variability and of particular climate processes.


a number of diagnostic tests [of the models] have been proposed, but few of them have been applied to the models currently in use.

In fact, the models have performed poorly in comparison to observations, with global temperatures failing to even remain above the lower bound predicted by the IPCC, despite the steady rise in CO2 levels:

2. Furthermore, the IPCC even admits "isn't clear which [diagnostic] tests are critical" to verify and assess confidence in the models. The 2007 Report Chapter 8, page 52 states the diagnostic tests to assess confidence in feedbacks simulated by different models have "yet to be developed." In other words, the IPCC can't begin to make any assessment whatsoever of confidence of the models at the heart of the IPCC "consensus" on anthropogenic global warming.  If the IPCC is unable to verify and determine confidence in the models, no other climate modelling publication in climate science can rightfully make the claim that the models have been verified, or determine confidence limits on the results.


4. The 2 forcings claimed by the IPCC to have a "high level" of understanding (man-made CO2 and other greenhouse gases plus unproven positive feedbacks) are in fact not well understood, with empirical satellite data showing the sensitivity to doubled CO2 with feedbacks is only about 0.7C  (Lindzen & Choi 2009, 2011 and others), a factor of 4 less than assumed by IPCC climate models.


5. The climate models falsely assume infrared "back-radiation" from greenhouse gases can heat the oceans (71% of the Earth surface area). In fact, IR wavelengths are only capable of penetrating the surface of the ocean a few microns (millionths of a meter), with all energy absorbed used up in the phase change of evaporation (which actually cools the sea surface), with no remaining energy to heat the ocean bulk. This fact alone completely invalidates the assumed radiative forcing from greenhouse gases incorporated in the models.
6. In contrast to IR "back-radiation," visible and especially UV radiation from the Sun is capable of penetrating the oceans to a depth of several meters to heat the oceans. Solar UV activity varies by up to 10% over solar cycles, unlike the total solar irradiance (TSI), which only varies by 0.1%. The IPCC climate models only consider changes in TSI and ignore the large changes in solar UV which heat the oceans. Solar UV also affects ozone levels, which in turn have large poorly understood effects on climate.


7.  Clouds are one of the most important yet most poorly understood variables, with the IPCC not even certain whether clouds have a net warming or cooling effect. The empirical data show cloud albedo declined over past few decades and accounts for at least 3 times as much warming as greenhouse gases. Whether the cloud changes are due to the cosmic ray theory of Svensmark et al or not, this remains an unexplained huge factor not incorporated in the models. As pointed out by Dr. Roy Spencer, a mere 1-2 % change in global cloud cover alone can account for either global warming or cooling. The changes in cloud cover secondarily related to solar activity noted by Svensmark et al have an amplitude of about 4%: 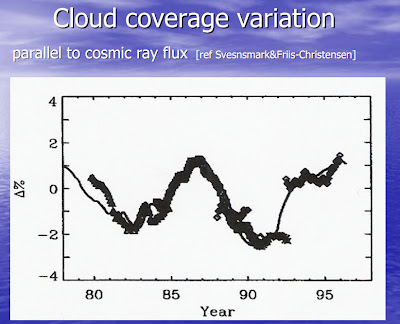 8. Ocean oscillations, which can have a periodicity of up to 60 years (e.g. the Pacific Decadal Oscillation), and huge effects upon worldwide climate, are not incorporated in the climate models. Ocean oscillations alone could account for the warming of the latter 20th century that the IPCC chooses to ascribe to man-made CO2, while claiming there is no other explanation.

10. The latest climate models continue to greatly exaggerate sensitivity to CO2 by 67%. Despite admitting this, the model authors were unwilling or unable to tweak the models to match observed temperatures, allowing the exaggerated effects of CO2 to remain in the world's most commonly used climate model. How hard could it have been to correct the sensitivity to CO2, given that the supposedly sophisticated models can be replicated with a small handful of arbitrary and artificially linear forcing factors on a laptop PC?