New paper shows sea temperatures near Antarctica were about 10°C warmer 12,000 years ago

According to a press release from the British Antarctic Survey, temperatures of the Antarctic peninsula were 1.3°C warmer than today 11,000 years ago. Examination of a graph from the paper [below] also indicates nearby sea surface temperatures were up to a remarkable 10°C warmer than the 1961-1990 mean 12,000 years ago as the Earth emerged from the last major ice age. The graph also indicates the Antarctic peninsula warmed at a much faster rate from 13,000 to 12,000 years ago than over the past 1000 years. Greenhouse gases could not possibly explain this radical climate change, especially given the fact that there was little change in greenhouse gases during these periods and that infrared radiation from greenhouse gases cannot heat the oceans.

Related: The cognitive dissonance of AGW

New ice core data from the Antarctic Peninsula has revealed that temperatures in the region during the past 10,000 years have often been higher than they are today, and that warming of the sort seen there recently has also occurred in the pre-industrial past.

The new data are derived from a massive new 364m-long core extracted from the ice sheet lying on top of James Ross Island towards the northern tip of the Antarctic Peninsula in the freezing Weddell Sea. The core was extracted by scientists from the British Antarctic Survey, assisted by French boffins, who reached the area courtesy of the Royal Navy ice-patrol ship HMS Endurance and her helicopters.

The mighty core has allowed analysing boffins to reconstruct local temperatures and snowfall way back to the end of the last ice age. The info is of particular interest as the Peninsula has warmed up rather quickly over the last 50 years or so, and is bucking the overall Antarctic trend which has seen vast new expanses of sea ice appear around the coasts of the austral continent. Thus it is that the Ross Island ice core results have made it into this week's edition of agenda-setting boffinry mag Nature.

So what have we got? 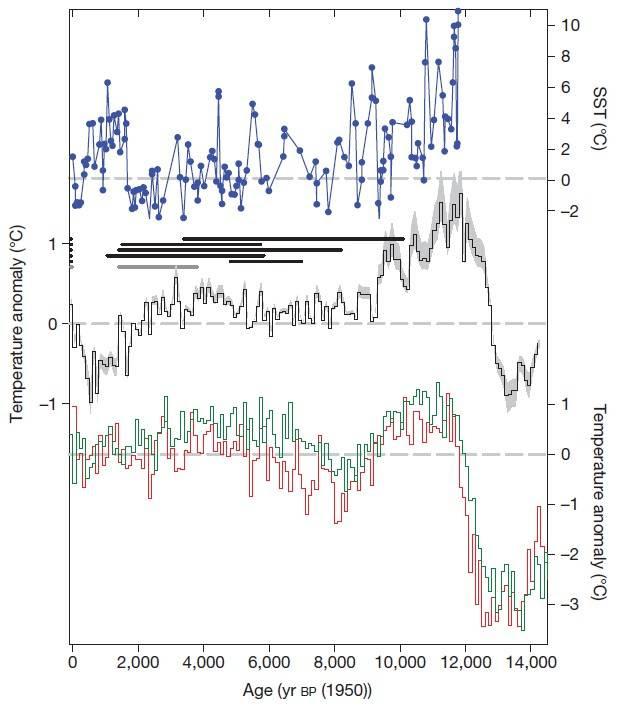 Top graph is Sea Surface Temperature (SST) relative to the 1961-1990 mean [grey horizontal dotted line]. Second graph is the reconstructed Antarctic temperatures from the ice core of the paper relative to the 1961-1990 mean [grey horizontal dotted line]. Graph caption from Nature:
The JRI ice-core temperature reconstruction relative to the 1961–1990 mean (black trace, 100-yr average; the grey band indicates the standard error of the calibration dependence) is shown alongside a sea surface temperature (SST) reconstruction
As is plain from the graphs, it has often been hotter than it is now at Ross Island during the past 10,000 years - today's temperatures are nothing exceptional. The idea that they must result from man-made carbon emissions doesn't, on the face of it, seem that credible.

But perhaps the recent warming has been exceptionally, unprecedentedly fast? The Esperanza station not far from James Ross has recorded a climb of 2°C since it was established in 1958. Maybe something is happening along the Peninsula which has never happened before in the Holocene (post Ice Age) era?

It would certainly seem so. A press release [1] issued ahead of the Nature paper by the British Antarctic Survey states uncompromisingly:


The scientists reveal that the rapid warming of this region over the last 100 years has been unprecedented.

[Since the publication of this article the press release webpage has been amended to say "very unusual" - Ed.]

Hold on though. The actual Nature paper [2] has this to say:


The high rate of warming over the past century is unusual (but not unprecedented) in the context of natural climate variability over the past two millennia.

And for good measure:


Repeating the temperature trend analysis using 50-year windows confirms the finding that the rapidity of recent Antarctic Peninsula warming is unusual but not unprecedented ... natural millennial-scale climate variability has resulted in warming on the eastern Antarctic Peninsula that has been ongoing for a number of centuries and had left ice shelves in this area vulnerable to collapse.

So yes, ice shelves along the shores of the Weddell Sea may very well snap off in coming years, especially if warming should continue. It appears to have happened often enough in the pre-industrial past:


There is evidence for instability of the Larsen A ice shelf between 3,800 and 1,400 yr [ago]. Farther south again, the Larsen B ice shelf probably remained intact throughout the Holocene, although there is evidence that the ice shelf was progressively weakened by melting ... temperatures similar to present occurred in this region for much of the Holocene, resulting in a regime in which ice shelves were only transient features along the northern-most part of the eastern Antarctic Peninsula and were undergoing decay farther to the south. An additional new perspective is that recent warming to levels consistent with the mid Holocene meant that the ice shelves along the northeastern Peninsula were poised for the succession of collapses observed there over recent decades.

Or in other words there really doesn't seem to be anything happening on the Antarctic Peninsula that hasn't happened before. Global warming may, as may climate scientists believe it is, be set to increase disastrously in the coming century: but there's no particular sign of it to be seen at the Peninsula, now that we have an accurate insight into the area's past history.
What this episode does show is just how blindly and unquestioningly the general scientific and media communities believe in the idea of carbon-driven climate apocalypse: the mindset of the PR staffer who wrote that press release and the various journalists who have uncritically reprocessed it is more reminiscent of religion than of science.