A paper published today in Advances in Space Research corroborates the cosmic-ray theory of climate and "proves that cosmic rays play an essential role in climate change and main part of climate variations can be explained by [the] mechanism of action of CRs [Cosmic Rays] modulated by the solar activity on the state of lower atmosphere and meteorological parameters."


According to the author

"We demonstrate that the detrended annual means of global surface air temperature in 1965–2012 show the maxima during CRs [Cosmic Rays] and Dst index [of the solar wind] minima. It proves that CRs [Cosmic Rays] play essential role in climate change and main part of climate variations can be explained by Pudovkin and Raspopov’s (1992) mechanism of action CRs [Cosmic Rays] modulated by the solar activity on the state of lower atmosphere and meteorological parameters. Following this we have to seek for another ways of looking for global warming reason, first of all, as a man impact on climate."

Data from the paper shows a strong correlation between cosmic rays and detrended surface temperatures in two locations 1966-2006 and 1965-2012: 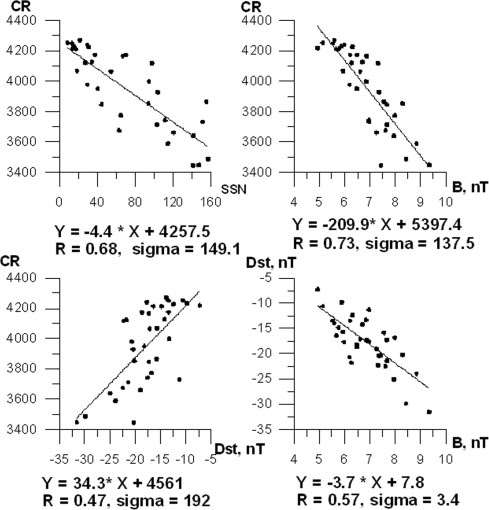 We have studied conditions in interplanetary space, which can have an influence on galactic cosmic ray (CR) and climate change. In this connection the solar wind and interplanetary magnetic field parameters and cosmic ray variations have been compared with geomagnetic activity represented by the equatorial Dst index from the beginning 1965 to the end of 2012. Dst index is commonly used as the solar wind–magnetosphere–ionosphere interaction characteristic. The important drivers in interplanetary medium which have effect on cosmic rays as CMEs (coronal mass ejections) and CIRs (corotating interaction regions) undergo very strong changes during their propagation to the Earth. Because of this CMEs, coronal holes and the solar spot numbers (SSN) do not adequately reflect peculiarities concerned with the solar wind arrival to 1 AU. Therefore, the geomagnetic indices have some inestimable advantage as continuous series other the irregular solar wind measurements. We have compared the yearly average variations of Dst index and the solar wind parameters with cosmic ray data from Moscow, Climax, and Haleakala neutron monitors during the solar cycles 20–23. The descending phases of these solar cycles (CSs) had the long-lasting solar wind high speed streams occurred frequently and were the primary contributors to the recurrent Dst variations. They also had effects on cosmic rays variations. We show that long-term Dst variations in these solar cycles were correlated with the cosmic ray count rate and can be used for study of CR variations. Global temperature variations in connection with evolution of Dst index and CR variations is discussed.
Posted by MS at 11:48 PM