According to 1990 IPCC Report, warming since 1990 is still within natural variability

According to the 1990 IPCC Report, an additional 0.5C global warming would need to be observed before natural variability could be distinguished with high confidence from an "enhanced greenhouse effect" due to man-made emissions.  However, as an article today at Reason.com points out,

"...enhanced greenhouse warming above the noise of natural climate variability would not yet have crossed over the benchmark (+0.5°C) set by the IPCC back in 1990. Interesting."

Satellite data indicates only ~0.2C warming since 1990, considerably short of the 0.5C threshold the IPCC set for itself in 1990 to determine whether additional global warming was within natural variability.

The activist-IPCC of today conveniently discarded these goalposts, and unjustifiably claims (without any statistical basis) 95% confidence that "most" global warming since 1950 is man-made. 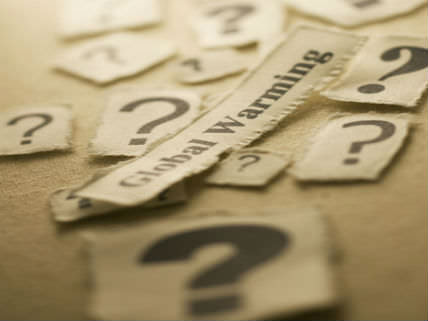 DreamstimeMany commentators in response to my article last week, "What Evidence Would Persuade You That Man-Made Climate Change Is Real?," asserted that the climate models had failed in their predictions with regard to trends in hurricanes (cyclones), tornadoes, and droughts. So I did an admittedly quick scan of all five of the Intergovernmental Panel on Climate Change's physical sciences reports to see what they actually said.
As far as I can tell, all of the reports admit that the observational data do not definitively show any trends with regard to those particular aspects of climate. With regard to model outputs concerning those trends, the IPCC reports characterize them using tentative terminology such as "encouraging" back in 1990 and "medium evidence" and "medium agreement" in matching observational trends in the most recent report. In general, the models are not predicting a worsening trend in hurricanes, tornadoes, and droughts, at least in the short run.
In any case, I came across the chapter, "Detection of the Greenhouse Gas Effect in the Observations" in the 1990 IPCC report. The goal of the chapter was to figure out a benchmark for when a firm signal for enhanced greenhouse warming might emerge. From the report:

8.4 When Will The Greenhouse Effect be Detected?
The fact that we have not detected the enhanced greenhouse effect leads to the question when is this likely to occur? As noted earlier, this is not a simple yes/no issue. Rather it involves the gradual accumulation of evidence in support of model predictions, which in parallel with improvements in the models themselves, will increase our confidence in them and progressively narrow the uncertainties regarding such key parameters as the climate sensitivity. Uncertainties will always remain. Predicting when a certain confidence level might be reached is as difficult as predicting future climate change – more so, in fact, since it requires at least estimates of both future signal and future noise level.
Nevertheless, we can provide some information on the time-scale for detection by using the unprecedented change concept mentioned briefly in Section 8.14. This should provide an upper bound to the time of detection since more sophisticated methods should produce earlier results. We take a conservative view as a starting point namely that the magnitude of natural variability is such that all of the warming of the past century could be attributed to this cause. (Note that this is not the same as denying the existence of an enhanced greenhouse effect. With such a noise level the past warming could be explained as a 1°C greenhouse effect offset by 0.5°C natural variability.) We then assume, again somewhat arbitrarily that a further 0.5°C warming (i.e., a total warming of 1°C since the late nineteenth century) is required before we could say with high confidence, that the only possible explanation would be that the enhanced greenhouse effect was as strong as predicted by climate models. Given the range of uncertainty in future forcing predictions and future model-predicted warming when would this elevated temperature level be reached?

IPCC
The answer is given in Figure 8.5. [Basically, the upper curve is assumes a fast warming rate and the lower one a slow warming rate. If fast, warming will be detected by 2002; if slow no detection until 2047.]
Figure 8.5 Text: If a further 0.5°C warming were chosen at the threshold for detection of the enhanced greenhouse effect then this would be reached sometime between 2002 and 2047.
On the basis of this simple analysis alone we might conclude that detection with high confidence is unlikely to occur before the year 2000. If stringent controls are introduced to reduce future greenhouse gas emissions and if the climate sensitivity is at the low end of the range of model predictions then it may be well into the twenty-first century before we can say with high confidence that we have detected the enhanced greenhouse effect.

I have earlier reported the various per decade warming rates in the observational record. The highest rate is +0.16°C per decade and the lowest is +0.13°C per decade. Assuming those rates had been maintained since 1990 (and they have not been so) mean global temperature would have risen by between +0.4°C and +0.325°C by now.
In other words, enhanced greenhouse warming above the noise of natural climate variability would not yet have crossed over the benchmark (+0.5°C) set by the IPCC back in 1990. Interesting.
The 1990 IPCC report notes that much depends on climate sensitivity; how much warming can be expected for a doubling of the concentration of carbon dioxide in the atmosphere. Low sensitivity means slower and less warming and higher means the opposite. That issue remains unsettled science.
Posted by MS at 5:04 PM