WSJ: The End of Doom: Despite an explosion in population greater than Malthus could have ever imagined, global living standards are higher than ever

Despite an explosion in population greater than Malthus could have ever imagined, global living standards are higher than ever.


By
NIGEL LAWSON
July 27, 2015 7:22 p.m. ET  THE WALL STREET JOURNAL
69 COMMENTS
We live in an age of all-pervasive cultural pessimism. In one sense, this is understandable. The 18th century, the Age of Enlightenment, produced an explosion of scientific discovery as men’s minds escaped from the shackles of subservience to authority, both political and ecclesiastical. The 19th century was the great age of optimism, as technological development exploited the achievements of science, bringing inventions like the locomotive, the electric light and the telephone.
That optimism dissipated in the 20th century, when two disastrous world wars exposed the dark side of mankind. Far from recovering a sense of hopefulness during the relative peace of the 21st century, gloominess has become the default position of the intellectual classes in the Western world. As Pope Francis’ recent encyclical, “Laudato Si’,” puts it: “We may be leaving to coming generations debris, desolation and filth.”
Ronald Bailey begs to differ. As his book demonstrates, a careful examination of the evidence shows that, at least in material terms (which is not unimportant, particularly for the world’s poor), life is getting better. The overriding reason for this, according to Mr. Bailey, is continuing technological progress, facilitated—and this is crucial—by the global triumph of market capitalism. 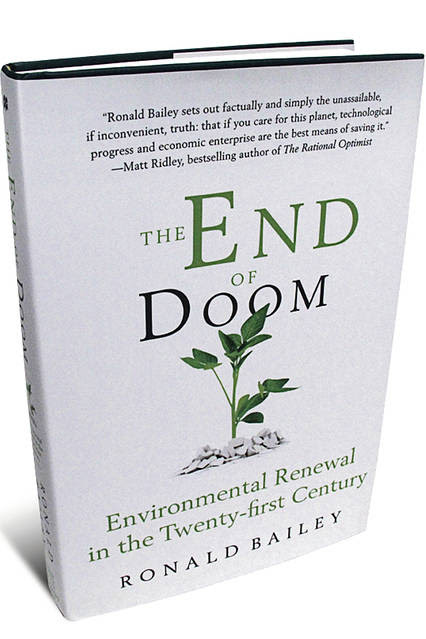 THE END OF DOOM

By Ronald Bailey
Thomas Dunne, 345 pages, $27.99
Among the scares examined by Mr. Bailey in “The End of Doom: Environmental Renewal in the Twenty-First Century” are overpopulation, the exhaustion of natural resources (particularly oil), the perils of biotechnology and genetic modification, and global warming.
Mr. Bailey has little difficulty demonstrating that, despite an explosion in world population greater than Thomas Malthus could possibly have envisaged in the 18th century, global living standards are higher than ever. “Food,” he writes, citing statistics from the World Bank and other organizations, “is more abundant today than ever before in history.” In the past 50 years alone, global food production has more than tripled.
It is also more than likely, in the opinion of most demographers, that world population will peak in the relatively near future and then start to decline. Mr. Bailey attributes this to the related phenomena of growing personal wealth in the developing world and the advance of education, particularly for girls, in those countries. He underplays, I suspect, another factor: Perhaps the most striking aspect of global development is the dramatic migration of population from the country to the city. Of course, this population movement is excellent news for wildlife and biodiversity.
It is even easier for him to show that a fear of the world running out of natural resources, popularized by scaremongers like Stanford demographer Paul Ehrlich, is wholly without foundation, as an elementary understanding of markets clearly shows. No doubt the age of oil will one day come to an end. But as my old friend Saudi Arabia’s Sheikh Yamaniused to point out, the Stone Age did not come to an end because we ran out of stone.
As for the alleged perils of biotechnology and genetic modification (which is simply an improved form of the age-old practice of the selective breeding of plants), if there was any substance to the fears of Frankenfoods, these practices would have stopped decades ago. What the green revolution has done is feed the world and reduce poverty on an unparalleled scale.
I part company to some extent with Mr. Bailey on global warming, where he claims that “the balance of scientific evidence suggests that man-made climate change could become a significant problem by the end of this century.” This is highly unlikely. The so-called greenhouse effect is certainly a scientific fact, but all the evidence suggests that its magnitude is modest, its progress is slow and we can readily adapt to it.
The estimated rise in mean global temperature since around 1880 is 1.4 degrees Fahrenheit. Yet the extent to which humans are responsible for this change is outweighed by the climate system’s own variability. Nations like Singapore, whose climate is 22.5 degrees hotter than the global average, suggest that urban planning can continue to outpace nature, as former global-warming alarmist James Lovelock rightly noted in his recent book, “A Rough Ride to the Future.”
And, as Mr. Bailey points out, the overriding case against the abandonment of fossil fuels is that any benefit that might occur would only help generations yet unborn at the expense of impoverishing those alive today, particularly those in the developing world. Which is why the world will not abandon fossil fuels.
If there is a connecting thread among all these irrational prophecies, and the profoundly harmful policies that the doomsters recommend, it is the precautionary principle, which this book rightly castigates. Based on a confusion between the sensible precept “be careful” and the nonsensical proposition that you can’t be too careful, it insists on taking the worst-case scenario as the outcome that should dictate policy. On that basis, one would never get in a car. And the massive technological advances that we have seen since the Industrial Revolution, and the reduction in global poverty that has followed, would never have occurred.
Another factor is the quasi-religious appeal of these prophecies, which may help to explain the papal encyclical to which I referred at the start. Even more recently, the Church of England at its latest synod called for all vicars to be trained in “eco-theology” as well as the Bible. It also called for churchgoers to do without lunch on the first day of each month, as a fast against climate change. Perhaps this should not be mocked: It might help combat obesity, which is probably more damaging than climate change.
“The End of Doom” is not quite in the same class as Matt Ridley’s classic, “The Rational Optimist,” but it is a good book and deserves to be widely read.
Lord Lawson served as Britain’s Secretary of State for Energy (1981-83) and Chancellor of the Exchequer (1983-89). He is chairman of the Global Warming Policy Foundation.
Posted by MS at 4:04 PM