A new peer-reviewed paper Climate change between the mid and late Holocene in northern high latitudes reviews 110 temperature proxies of the past 6000 years in the northern high latitudes and finds "A large majority of the here investigated temperature reconstructions indicate that temperatures were warmer at the mid-Holocene [6000 years ago] compared to the preindustrial period [500 years ago], both in summer,winter and the annual mean. By taking simple arithmetic averages over the available data, the reconstructions indicate that the northern high latitudes were 1.0°C warmer in summer, 1.7°C in winter and 2.0°C warmer in the annual mean temperature at the mid-Holocene (6000 years ago) compared to the recent pre-industrial." The paper also notes (p. 6) that the temperature change via proxy reconstructions from years 1501 to 2000 "appears to be only ~0.05°C for the Northern Hemisphere as a whole according to data from Mann et al (2009)." [that is not a typo - the paper states five one-hundredths of one degree change from pre-industrial 1501 AD to the year 2000] 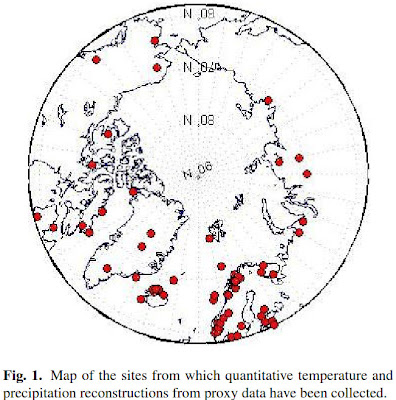 Therefore, annual northern hemisphere temperatures during the Holocene 'Climate Optimum' 6000 years ago were ~1.95°C hotter than at the end of the 20th century. The "hockey team" of Michael Mann et al has claimed that prior warming periods were localized to the European Arctic, but this extensive review shows the current warming is not unprecedented, not localized, and was greatly exceeded in the recent geologic past.

Note: the Corrigendum of this paper contains the updated figures above.
Posted by MS at 11:33 AM