This study noted in the Wall Street Journal finds the time period to break-even on costs for an electric vehicle compared to a conventional internal combustion engine vehicle is 8 years. Add to this the cost of a new $10,000 battery pack, which requires replacement every 8-10 years, and the break-even point becomes infinity. What is the resale value of an 8 year old electric vehicle that needs a new battery?

Electric cars can draw their power from natural gas, coal, wind or even the sun. But their economics are purely nuclear.

Nuclear power stations are relatively cheap to run, but enormously expensive to build. To commit to that, you need either very cheap financing—preferably subsidized—or clairvoyance on long-term electricity prices. The same goes for electric cars.

In a forthcoming report, the Boston Consulting Group estimates that even though costs should fall by 64% between 2009 and 2020, a typical 20 kilowatt-hour (kWh) battery for a pure electric vehicle will still set you back almost $10,000 in today's money by the end of that period. So while your futuristic ride will run on lower cost electricity versus presumably expensive gasoline, the upfront outlay could negate this benefit. 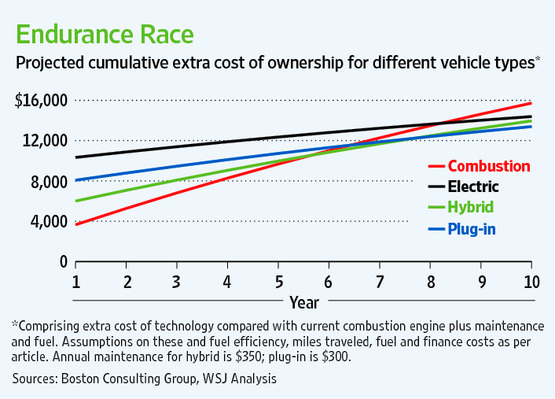 That could be a powerful headwind not just for battery-powered vehicles, but also hybrid and plug-in hybrid vehicles such as General Motors' Chevrolet Volt. Under BCG's scenario for tailpipe emissions reductions, the extra cost involved with a hybrid vehicle compared to current combustion engine vehicles could amount to $5,000 in today's money by 2020, about half the extra cost of a battery-only vehicle. Plug-in costs would lie somewhere in between.

So how many years would it take for a typical driver to make back the extra outlay for different technologies with fuel savings?

Assume a driver travels 14,000 miles per year. The advanced internal combustion engine gets 47 miles per gallon. The hybrid and, during the 20% of the time it runs on its gasoline engine, the plug-in hybrid both get 79 miles per gallon. That assumes they maintain their efficiency advantage relative to our new and improved traditional engine. The all-electric vehicle, meanwhile, and the plug-in's electric motor get four miles per kWh.

Assume also that annual maintenance costs range from $400 for the vehicle with the internal combustion engine down to $200 for the pure electric vehicle, which has fewer moving parts. In addition, discount annual cash outlays at 5%, in line with vehicle financing costs.

The key input is energy. At long-term prices of $4.50 for a gallon of gasoline and 11 cents per kWh, it takes just under six years for the hybrid vehicle to be more cost effective than the one with the advanced internal combustion engine. The plug-in's payback period is seven years; the electric vehicle about eight years. That's a long time in car years; beyond the expiry of a typical lease.

Higher gasoline prices shift things in the electric car's favor: At $6 gasoline, it pays off in less than six years. That's still pretty long and also doesn't factor in any costs for, say, installing a charger in your garage.

For electric vehicles to make serious headway, they will need much higher fuel prices or taxes, faster reduction in technology costs, or continuing big subsidies. The latter looks unlikely to prove sustainable in the U.S., which is why, in line with BCG's thinking, China and Europe— where regulatory incentives are more widespread than the U.S.—could be more receptive markets. What millions of Chinese driving gasoline-free vehicles will do to the oil price that underpins the electric vehicle's economics is another matter.
Posted by MS at 1:10 PM