Long viewed as a remedy for the world's dependence on fossil fuels, the solar industry is dimming as makers of panels used to harness the sun continue to fall by the wayside.
Bankruptcies, plummeting stock prices and crushing debt loads are calling into question the viability of an industry that since the 1970s has been counted on to advance the U.S.—and the world—into a new energy age.
Global demand for solar power is still growing—about 8% more solar panels will be installed this year compared with 2010, according to Jefferies Group analysis—but it is expected to flat-line next year. 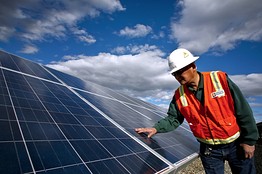 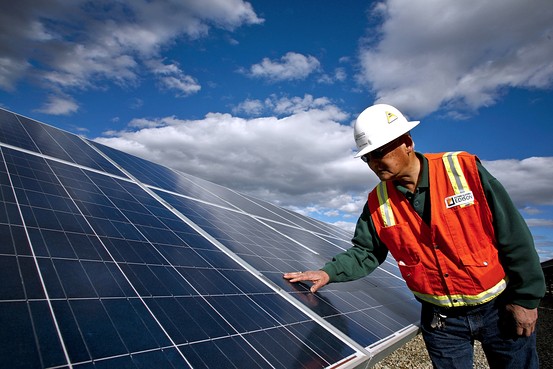 Bloomberg News
Solar modules in Porterville, Calif., in February.
At the heart of the industry woes are swiftly falling prices for solar panels and their components—polysilicon, wafers, cells and the modules themselves. The reason is simple: There are simply too many manufacturers trying to sell their wares.
Over the past several months, at least seven solar-panel manufacturers have filed for bankruptcy or insolvency, including two German companies in the past week—Solar Millennium AG and Solon SE—and, most notably, Solyndra LLC, the Fremont, Calif., company embroiled in a criminal investigation into whether the company defrauded the U.S. government.
Of the 10 largest publicly traded companies by market capitalization whose focus is making solar components, six reported losses in the third quarter, and all but one of these 10 saw their bottom line weaken from a year earlier. Underscoring how debt is weighing down the industry, six of the 10 also had debt on their balance sheets that exceeded their market capitalizations.
Many more manufacturers are in a precarious financial situation, such as Energy Conversion Devices Inc., whose stock has nose-dived by 95% this year as the Auburn Hills, Mich., company has suspended factory operations, deferred interest payments and restructured its staff. Energy Conversion couldn't be reached for comment.
Overall, public-market investors are punishing the solar sector, sending shares down nearly 57% this year as of Dec. 19, according to investment bank Stifel Nicolaus, compared with a decline of 3% for the S&P 500.
Even First Solar Inc., the darling of the industry, is restructuring amid weaker results and project delays. In a Dec. 14 call with analysts that Jeff Osborne, an analyst with Stifel Nicolaus, said "seemed like the funeral for the whole sector," Mike Ahearn, FirstSolar's chairman and interim CEO, said the industry will suffer pricing pressures indefinitely.
This means the shakeout among manufacturers will likely continue for some time. "The industry simply cannot support 300-plus cell and modular manufacturers, so the companies left will capitulate and exit the industry," said Zhengrong Shi, chief executive of Chinese solar-panel manufacturer Suntech Power Holdings Co., during a late-November call with investors. Suntech is cutting its operating expenses by at least 20% next year as it hopes to stem this year's 70% stock-price slide.
The glut of manufacturers stems from various sources over the last several years, including efforts by the U.S. government to encourage clean technology, venture capitalists pouring into the sector and institutional investors buying into IPO issues of solar companies amid an oil-price boom and a heightened sense of climate-change urgency. At the same time, European governments offered rich subsidies for solar installation, driving demand in the market.
"People were doing what they can to make a profit, without thinking ahead," said Pallavi Madakasira, an analyst with research firm Lux Research Inc.
But the biggest factor was the decision by the Chinese government to direct its banks to lend freely to new manufacturers a few years ago. Since 2009, Chinese banks have offered at least $43 billion in credit facilities to Chinese renewable-energy companies, according to Bloomberg New Energy Finance. It isn't clear how much of that money has been drawn down, but the easy access to capital during the height of the global credit crunch allowed Chinese companies to build factories and start production, forcing competitors in Europe and the U.S. to do the same.
The plentiful production of solar panels resulted in a cutthroat pricing competition. A year ago, customers—mostly distributors of panels and project developers—could buy solar panels for $1.60 per watt, on average. Now the going price is between 90 cents to $1.05 per watt, according to investment bank Jefferies.
Meanwhile, U.S. trade authorities are investigating domestic manufacturers' complaints over possible dumping of solar panels on the U.S. market by Chinese makers.
Despite the buyers' market, customers aren't opening their wallets fast enough. In Europe, which buys more solar panels than any other region, banks clamped up on funding and customers wound up with warehouses full of solar panels, causing them to defer additional orders. Many are also wary about committing to new solar contracts while prices keep falling.
Germany, for years the world's largest market for solar, is seeing a 29% decline in demand this year over 2010, according to Jefferies. That is quite a contrast to 2010, when installations in Germany nearly doubled.
Meanwhile, in the U.S. demand has actually risen because utilities have been buying solar power to fill state mandates, while large plant projects continue to attract investment from companies such as Google Inc., NRG Energy Inc. and MidAmerican Energy Co. That growth may not be sustainable, however, because the mandates for renewable energy are quickly being fulfilled.
And if solar is getting cheaper, so too is competing natural-gas power.
Faced with demand challenges, many manufacturers are beginning to moderate how much they produce. That means factories, already built and put in place, are underutilized, which raises the cost per each panel produced.
There is still light on the industry's horizon. Electricity demand globally is set to rise over the next few years, as developing nations gobble up power and suffer from power-plant pollution—a problem that solar can help alleviate. And as technology advances and costs drop, solar-panel makers can supply power without a need for heavy government subsidies.
But those new markets will take time to emerge. In the meantime, companies will continue to struggle to survive the crunch.