A paper published today in Global and Planetary Change finds solar radiation at the Earth surface in Spain "shows a significant increase over the 1985-2010 period" of "+3.9 Wm-2 per decade." By way of comparison, the alleged forcing from increased CO2 during the same period was only 0.11 Wm-2 at the Earth surface per decade. The authors attribute the large increase in solar radiation to a "decrease in clouds and/or aerosols." Several other papers have shown a decrease in cloudiness since the 1980's could alone account for all global warming observed since the ice age scare of the 1970's.

IPCC formula for alleged CO2 forcing at the top of the atmosphere based on CO2 levels from 1985 to 2010: 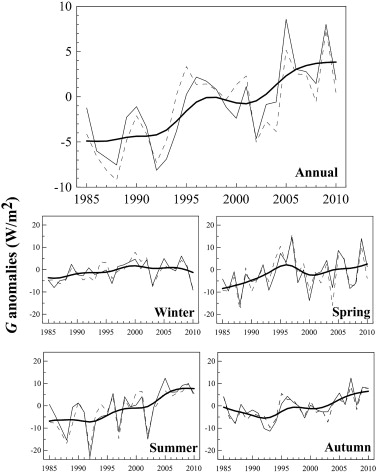 Global and diffuse solar radiation in Spain: Building a homogeneous dataset and assessing their trends

from Global and Planetary Change

There is a growing interest in the study of decadal variations in surface solar radiation during the last decades, although the analyses of long-term time series in some areas with major gaps in observations, such as in Spain, is still pending. This work describes for the first time the development of a new dataset of surface solar radiation in Spain based on the longest series with records of global solar radiation (G), most of them starting in the early 1980s. Additional records of diffuse solar radiation (D), which is a component of G much less studied due to the general scarcity of long-term series, are available for some of these series. Particular emphasis is placed upon the homogenization of this data set in order to ensure the reliability of the trends, which can be affected by non-natural factors such as relocations or changes of instruments. The mean annual G series over Spain shows a tendency to increase during the 1985-2010 period, with a significant linear trend of +3.9 Wm-2 per decade. Similar significant increases are observed in the mean seasonal series, with the highest rate of change during summer (+6.5 Wm-2 per decade) and secondly in autumn (+4.1 W m-2 per decade) and spring (+3.2 Wm-2 per decade). These results are in line with the widespread increase of G, also known as brightening period, reported at many worldwide observation sites. Furthermore, the annual mean D series starts without relevant variations during the second half of the 1980s, but it is disturbed by a strong increase in 1991 and 1992, which might reflect the signal of the Pinatubo volcanic eruption. Afterwards, the mean series shows a tendency to decrease up to the mid-2000s, with a significant linear trend of -2.1 Wm-2 per decade during the 1985-2010 period. All these results point towards a diminution of clouds and/or aerosols over the area.