Since the 1970s, Western politicians keep betting on $10 gasoline that never comes.

Tesla, an electric-car company on which the political class has showered subsidies, rolled out its newest model last week, complete with high-tech safety features like lane-departure warning, blindspot monitoring, collision avoidance and self-parking. Tesla’s stock dropped 8%, but probably not because these mundane features long have been available in other luxury models.

At $2.99, the price to which gasoline had fallen at some California stations last week, electric cars becoming a mass-market taste and not just an item for wealthy hobbyists recedes from probability. If Democrats especially start to find it politically no longer saleable to subsidize a toy for the rich, the company may be in real trouble.

Since World War I, the retail price of gasoline has fluctuated in a band between $2 and $4 (using 2006 dollars as a benchmark). Since the 1970s, though, politicians have repeatedly wedded themselves to policies premised on the idea that oil prices can only go up, up, up, in prelude to oil running out altogether. 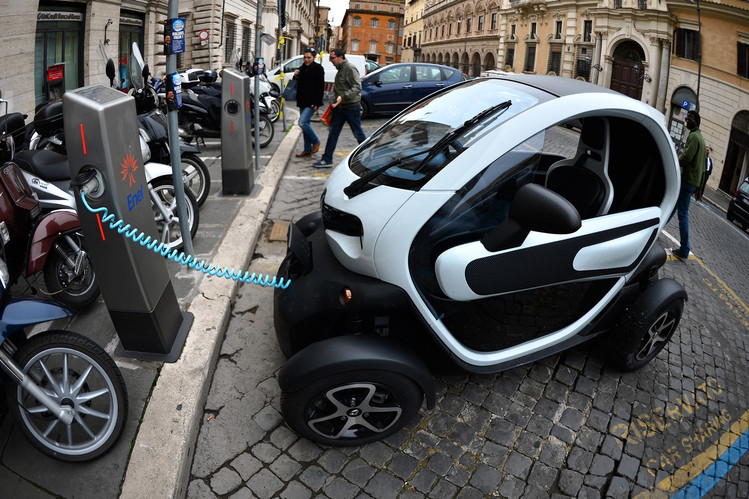 A Renault Twizy electric car charging at a car-sharing station in Rome.

In fact, Tesla illustrates a theme from a column here back in 2008, when everyone from President George Bush to Nancy Pelosi to freshman Sen. Barack Obama was in a fever to simulate a deeper understanding of our Middle East entanglements by calling for new auto gas-mileage mandates.

These mandates, we pointed out at the time, would only divert tens of billions of auto-industry investment dollars to relatively mingy and uneconomic improvements in fuel mileage that car buyers don’t highly value. The real opportunity, meanwhile, was for revolutionary safety technologies like those Tesla is now belatedly introducing, which would necessarily be delayed by Washington’s misallocation of industry resources.

All through the 2000s this column applauded rising oil prices to ration existing supplies and stimulate new supplies to accommodate the growth of China and India. What goes up, though, must come down when investment produces a glut, when demand can’t keep pace with supply—and when major producers keep goosing production even at a falling price in order to keep producing revenues for domestic governments.

That’s what’s happening now. Saudi Arabia and Iran are slashing prices in pursuit of market share in suddenly slower-growing Asian markets. Vladimir Putin , whose budget goes red at an oil price below $110 (oil hit $84.43 Tuesday in London), is being pressed by his No. 1 crony, Igor Sechin of Rosneft, for $40 billion from the Kremlin’s welfare reserve to boost the Russian oil company’s output at a time when sanctions are cutting it off from Western capital and knowhow.

The price of fossil energy may well be depressed for a while given a strong dollar and the Western world’s governance-cum-growth failures. If so, undermined will be a lot of fantasy policies. Germany and Britain already rue their expensive commitments to renewables, which has caused local manufacturers to pull up stakes for North America and its cheap shale gas.

The Obama administration is not peopled exclusively by naïfs. An official once anonymously acknowledged that its bailout of the U.S. auto industry was certain at some point to run smack into its extreme fuel-mileage mandates (54.5 miles per gallon by 2025) that require the auto industry to invest in fuel-saving technology of little value to consumers.

We can be pretty sure, though, this non-naïf was not President Obama himself, who has acted consistently as if $10 gasoline must appear ahistorically and mystically to redeem his policies. In a major speech in 2011, he declared as a “fact” that oil prices must rise, demand must exceed supply, and America cannot depend on a “resource that will eventually run out.”

He obviously has not taken an inventory of the planet’s vast hydrocarbon stores, including methane hydrates.

What will happen next is easy to predict. Ex-GM Vice Chairman Bob Lutz , seeing the world through reality glasses, has long called for a European-style gas tax to make Americans want the cars Washington is forcing GM to build.

Green energy promoter Vinod Khosla in the past lobbied a receptive Nancy Pelosi for a floating oil tax to “correct” periodic low prices, which he attributed to an oil-industry conspiracy.

Tesla’s Elon Musk will be heard again (as he was a few years ago) calling for a gas tax to turn a $2 wholesale commodity into $10 gasoline at the pump.

The ethanol industry, just now opening its first “cellulosic” ethanol plants, which require $3-plus gas to be profitable, will present its list of demands backed by the clout of corn-state senators.

Their rationale will be global warming. But U.S. cars and light trucks account for 3% of global emissions, a share rapidly vanishing to nothingness as India and China develop. The real motive will be bailing out the joint public-private (i.e., crony) investment in policies that don’t work in a world of falling gas prices.
Posted by MS at 6:22 PM