The AGW "incontrovertible" theory requires a "fingerprint" of a tropical tropospheric "hot spot" to occur due to "back radiation" or "heat trapping" gases or "radiative confinement" [unphysical IPCC-speak]. Despite an army of researchers looking for said "hot spot", it is another "travesty" that it only exists in arbitrary virtual computer models and has stubbornly refused to form in the actual atmosphere. The 2nd law of thermodynamics explains why. The 2nd law requires the total entropy or "disorder" of the universe to increase or remain constant (at equilibrium). From the mathematical definition of entropy, a process in which heat flows from cold to hot has decreasing entropy. This can happen in a non-isolated system if entropy is created elsewhere, such that the total entropy is constant or increasing. The Clausius formulation of the 2nd law states that "heat doesn't flow from cold to hot (i.e. the net vector)" (without work input) because if it did, entropy would have to decrease. Forcing or 'work input' (which the passive atmosphere cannot provide) is required to cause heat to flow from cold to hot, such as in a heat pump, but the electrical work input to the heat pump results in an overall increase in entropy.

Some simple thought experiments are helpful. We all know that a hot cup of coffee in a cooler room cools down until equilibrium is reached, entropy increases, and both are the same temperature. This process satisfies the 1st law of thermodynamics since the amount of energy lost by the coffee is equal to the amount gained by the surrounding air. Now let us consider the reverse process - the hot coffee getting even hotter in a cooler room as a result of heat transfer from the room air. Everyone knows this process never takes place. It is clear that processes proceed in a certain direction and not in the reverse direction. The 1st law states that energy must be conserved and the 2nd law tells you in which direction the process will occur. The insulating coffee mug slows the rate of cooling as does the ambient heat in the cooler room and the insulation in the home, but none of these warm the coffee or decrease entropy. The cooler room does radiate energy to the warmer coffee, but it does not raise the temperature of the coffee since the net vector is always one-way from hot to cold; it just slows the rate of cooling.

Now let's extend the impossible net negative entropy thought experiment to the passive atmosphere. The illustration below from JoNova depicts the model-predicted AGW fingerprint tropical tropospheric "hot spot" which does not exist in the actual weather balloon measurements. The measurements show no vertically or horizontally isolated hot spot in accordance with the increase in entropy demanded by the 2nd law. The measurements show disorder compatible with increasing entropy rather than order required for a "hot spot". I have added the big red arrow and "entropy" to the JoNova diagram to illustrate the following thought experiment. 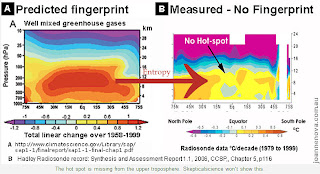 Arrow illustrates flow of heat in the entropy thought experiment
Assume the AGW "hot spot" existed and is the hot coffee and the remainder of the atmosphere the cooler room. In order to satisfy the 2nd law, total entropy must increase and the "hot spot" cool down both vertically and horizontally (isotropically) until equilibrium. Just like the impossible process of the cooler room causing the hotter coffee to warm up, the cooler atmosphere cannot warm the hotter earth; it just slows the rate of cooling of the earth. In order for the passive atmosphere to add energy or 'work input' or 'forcing' to locally decrease entropy as required for a heat pump to make heat flow from cold to hot, entropy would have to increase elsewhere to satisfy the 2nd law requirement of a total increase in entropy; where might that be? Likewise, the home insulation does not "back radiate" to warm up the coffee; it just slows the rate of cooling of the hotter coffee. If we turn on a heat pump to warm up the home, that will slow the cooling of the coffee even more, while increasing the total entropy of the universe in accordance with the 2nd law. The AGW "hotspot" would require an unphysical, unstable process in violation of the 2nd law requirement of increasing entropy, and that is why it doesn't exist and won't happen.

Bonus thought experiment: If we put the coffee on a hot plate and switch on the electrical work input, that will warm the coffee. Question: which is better at warming the coffee: a) coffee on top of the hot plate or b) coffee under the hot plate analogous to the mid-tropospheric "hot spot" "warming" earth?