Geothermal boreholes provide a useful proxy to reconstruct temperatures of the past. The IPCC only shows borehole data from the past 500 years in AR4 graphs (e.g. figure 6.10b), conveniently leaving out the Medieval Warming Period, even though borehole proxy data is available for the past 20,000 years. Huang et al published worldwide borehole data for the past 20,000 years since the peak of the last major ice age, which shows the "Holocene Climate Optimum" about 6000-7000 years ago was 1-2°C warmer than the present and the Medieval Warming Period ~1000 years ago. This worldwide borehole data as well as ice core data from both Greenland and Antarctica show that the rate and extent of 20th century warming was not unprecedented and that much warmer periods have occurred naturally. 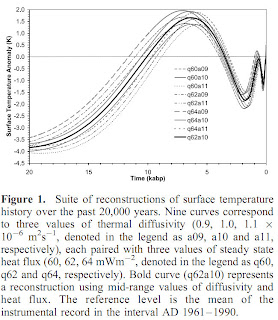 Higher resolution ice core data from Greenland also show cooling of 2-3°C over the past 8,000 years: 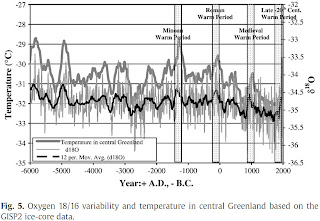