While the IPCC claims solar variability has little if any connection to climate change, the peer-reviewed paper A 2000-Year Context for Modern Day Climate Change by Maasch et al finds a strong, worldwide correlation between proxy records of solar output and climate. Also in contrast to statements of Michael Mann et al, the paper finds strong evidence that the Medieval Warming Period (MWP) and the Little Ice Age (LIA) were global, not local, phenomena, stating "The global distribution of the LIA and MWP and the agreement between climate proxy records and the D14C series over the last 2000 years indicate a strong association between solar variability and globally distributed climate change. This shows that change in the output of the Sun has significant impacts on climate." 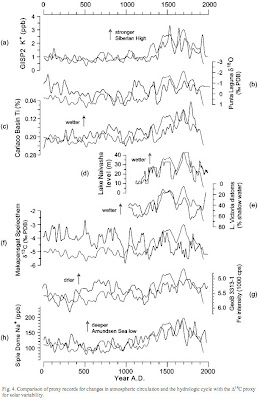 Figure shows eight climate proxies distributed from the Arctic to Antarctic showing MWP, LIA, and strong correlations to solar activity. The 2 series shown for each location are the solar and climate proxies.

ABSTRACT:  Although considerable attention has been paid to the record of temperature change over the last few centuries, the range and rate of change of atmospheric circulation and hydrology remain elusive. Here, eight latitudinally well-distributed (pole–equator–pole), highly resolved (annual to decadal) climate proxy records are presented that demonstrate major changes in these variables over the last 2000 years. A comparison between atmospheric 14C and these changes in climate demonstrates a first-order relationship between a variable Sun and climate. The relationship is seen on a global scale.


For papers by 860 scientists showing the MWP was a global phenomenon and in most studies hotter than the present, see the Medieval Warming Project
Posted by MS at 8:31 AM