NSIDC director Serreze: “The volume of ice left in the Arctic likely reached the lowest ever level this month.”

Serreze (photo at right): “I stand by my previous statements that the Arctic summer sea ice cover is in a death spiral. It’s not going to recover.” (Sept 2010)

“The reason so much (of the Arctic ice) went suddenly is that it is hitting a tipping point that we have been warning about for the past few years.” James Hansen, 2007

If Arctic sea ice was truly in a 'death spiral,' why does the 1st derivative (rate of change) of Arctic sea ice show one of the earliest and healthiest recoveries from the 2010 summer minimum over the past 7 years? 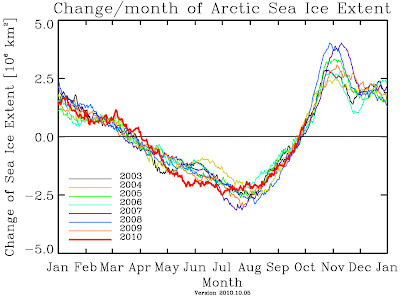 In addition, the 1st derivative for Antarctica sea ice also shows one of the longest sustained rates of sea ice accumulation for the 2010 winter compared to the past 7 years: 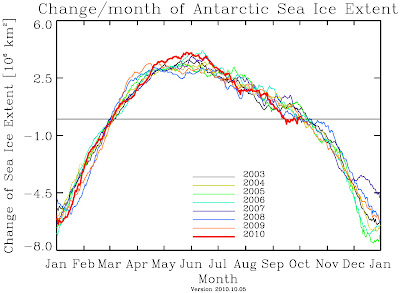