The fallacy of the greenhouse effect

A recommended post from the planetary vision blog, The fallacy of the greenhouse effect, explains in simple terms why the conventional explanation of the "greenhouse effect" violates both the 1st and 2nd laws of thermodynamics:


An object can warm through the absorption of electromagnetic radiation (EMR). However, an object passively warmed can't warm the object providing the warmth. Were this to be so energy could be multiplied for no extra input merely by having objects mutually radiate EMR. But there is no such temperature multiplication because the amount mutually exchanged cancels. It does not add as is required by greenhouse theory.

The reason that an object can be heated by EMR on earth by the sun is because the sun is warmer than the earth.  The idea of the greenhouse effect is that the cooler, upper layers of air are able to warm a warmer ground by backradiation. But this can not happen.

Greenhouse theory would even require that the backradiation from the earth to the sun warms the sun by a small (if practically imperceptible) amount. This is impossible too because a cooler object can not warm a warmer one unless work is done.  But greenhouse gas, not having an energy source, can not provide this work nor can the earth provide work to the sun.

200-plus years of thermal study must be thrown out the window if we are to believe that EMR from a colder object can warm a warmer one. If that were the case energy could be made from nothing merely by bringing two objects together mutually radiating EMR (such as the air and ground) such as the following examples show.

Let object A represent a warmer object radiating to an infinite heat sink C maintained at absolute zero.  Object B is introduced into its field of radiation and so is warmed: 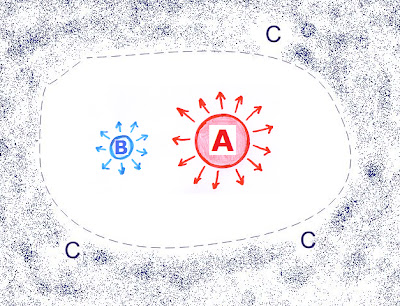 Object B comes up to equilibrium temperature.    Now it has its own radiation and object A is subject to more radiation than it was before (which was zero).  If the cooler object B can warm the warmer object A through backradiation then object A will heat to a higher temperature than before for free merely because object B is passively warmed.

Object A and B now radiate more energy to the universe then when A was by itself merely by B's presence. This is clearly not possible.

Now to carry it further let the sphere B be replaced by many such spheres B on one side of A.  They all radiate as much EMR as the original object B. With eight spheres the energy is multiplied eightfold according to greenhouse theory: 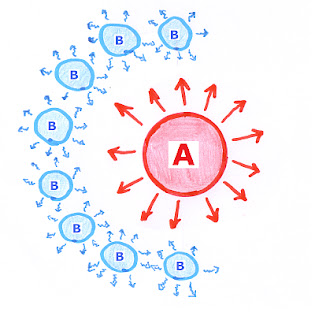 Object A is eight times as warmed by backradiation as it was when there was only one sphere B.  In the case of the atmosphere this is the equivalent of putting more greenhouse gas "energy absorbers" in the atmosphere.

Now let the EMR blocking coverage continue from eight spheres B to a hemispherical shell B.  This is a cross-section through B: 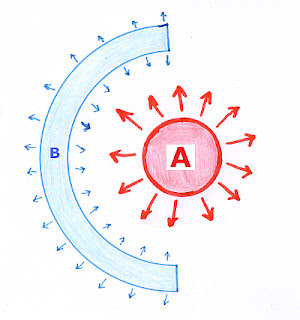 Now half the radiation of A is blocked by B.   According to greenhouse theory half of this half will be radiated back to object A thus warming it.  Object A now emits 100% +  25% now re-radiated back by the hemisphere B.  An extra 25% energy gain for free! 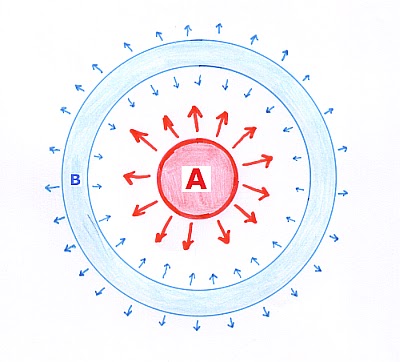 
(The outside shell B must radiate a total amount which was equal to A's original output.  Being at a larger radius it will have a lower emission temperature.  Effectively the shell B is a red shifter of the EMR spectrum.  Yet the amount of energy emitted in total will be the same.)

For me the resolution to the paradox is to view heat energy like a stream that only flows downhill, from warmer to cooler, despite the presence of backradiation.

An ordinary, human blanket creates warming by blocking convection not by "backradiation". An emergency aluminium foil blanket warms by a high reflectivity/low emissivity, not by absorption and re-emission.

In the case of the earth the only way that a chemical can alter temperature is by a lowered emissivity.  But greenhouse gases being good absorbers are also good emitters as per Kirchhoff's law.


An empirical example of how a cooler object can not warm a warmer object can be seen in the operation of a vacuum furnace.

go to SOURCE for rest