What may be the science story of the century is breaking this evening, as heavyweight US solar physicists announce that the Sun appears to be headed into a lengthy spell of low activity, which could mean that the Earth – far from facing a global warming problem – is actually headed into a mini Ice Age. 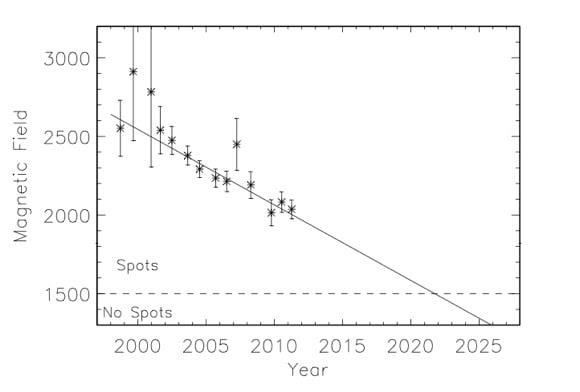 Ice skating on the Thames by 2025?
The announcement made on 14 June (18:00 UK time) comes from scientists at the US National Solar Observatory (NSO) and US Air Force Research Laboratory. Three different analyses of the Sun's recent behaviour all indicate that a period of unusually low solar activity may be about to begin.
The Sun normally follows an 11-year cycle of activity. The current cycle, Cycle 24, is now supposed to be ramping up towards maximum strength. Increased numbers of sunspots and other indications ought to be happening: but in fact results so far are most disappointing. Scientists at the NSO now suspect, based on data showing decades-long trends leading to this point, that Cycle 25 may not happen at all.
This could have major implications for the Earth's climate. According to a statement issued by the NSO, announcing the research:


An immediate question is whether this slowdown presages a second Maunder Minimum, a 70-year period with virtually no sunspots [which occurred] during 1645-1715.


Early records of sunspots indicate that the Sun went through a period of inactivity in the late 17th century. Very few sunspots were seen on the Sun from about 1645 to 1715. Although the observations were not as extensive as in later years, the Sun was in fact well observed during this time and this lack of sunspots is well documented. This period of solar inactivity also corresponds to a climatic period called the "Little Ice Age" when rivers that are normally ice-free froze and snow fields remained year-round at lower altitudes. There is evidence that the Sun has had similar periods of inactivity in the more distant past.

During the Maunder Minimum and for periods either side of it, many European rivers which are ice-free today – including the Thames – routinely froze over, allowing ice skating and even for armies to march across them in some cases.
"This is highly unusual and unexpected," says Dr Frank Hill of the NSO. "But the fact that three completely different views of the Sun point in the same direction is a powerful indicator that the sunspot cycle may be going into hibernation."

see also Major drop in solar activity predicted
and here and here
Posted by MS at 10:47 AM