Move Over, OPEC—Here We Come

In energy, North America is becoming the new Middle East. The only thing that can stop it is domestic politics.

The United States has become the fastest-growing oil and gas producer in the world, and it is likely to remain so for the rest of this decade and into the 2020s. Add to this output the steadily growing Canadian production and a likely reversal of Mexico's recent production decline, and theoretically total oil production from the three countries could rise by 11.2 million barrels per day by 2020, or to 26.6 million barrels per day from around 15.4 million per day at the end of 2011.
Whether the increase results in the U.S. reducing its imports or whether our net exports grow doesn't matter much to world balances. Either way, North America is becoming the new Middle East. The only thing that can stop this is politics—environmentalists getting the upper hand over supply in the U.S., for instance; or First Nations impeding pipeline expansion in Canada; or Mexican production continuing to trip over the Mexican Constitution, impeding foreign investment or technology transfers—in North America itself.
On top of this, the U.S. and Canada could see natural gas output rise by 22 billion cubic feet per day by 2020, with 14 billion of it coming from the Lower 48 states, four billion from Alaska and four billion from Canada. That's an increase of one-third, catapulting this continent into the ranks of significant exporters of liquefied natural gas.
These numbers provide a useful benchmark for measuring ways that policies could obstruct the pace of supply growth. We already have the experience of the BP/Macondo disaster in the Gulf of Mexico in April 2010, which led to a moratorium on drilling in U.S. federal waters, and a revamping of the U.S. regulatory regime governing leasing, revenue collection and safety. As a consequence, U.S. deepwater production has fallen by more than 300,000 barrels per day since then. 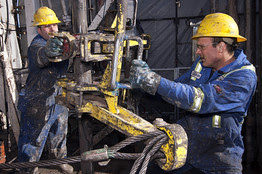 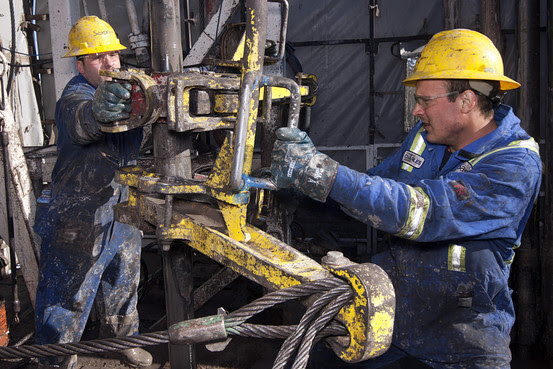 Bloomberg
Drilling operations at Pembina oil field near Pigeon Lake, Alberta, Canada
North America already has become the most important marginal source of oil and gas globally. U.S. imports of crude oil and petroleum-product imports have been plunging. The U.S. reached its peak as a net petroleum importing country in 2005-06. Since then, crude oil imports have fallen by almost two million barrels per day. Because the U.S. has the largest refining sector in the world, as domestic demand has fallen it has become a net petroleum-product exporting country—exporting more than 1.2 million barrels per day by the end of 2011—the first time it reached this status since 1949. The U.S.'s growing crude output is affecting the price difference between the traditionally more expensive light sweet crudes (which yield higher-value products like gasoline) and heavy sour grades.
Excess Canadian crude oil produced from oil sands is expanding at a rate of one million barrels a day every five years. The more that's produced, the less of a market there will be for oil from Venezuela and some other OPEC member countries with similar-quality oil, requiring them to either curtail production or lower prices. Even if oil prices rise in the medium term, we expect 2020 prices to be no more than $85 per barrel, compared with today's prevailing global price of $125.
The economic consequences of this supply-and-demand revolution are potentially extraordinary. We estimate that the cumulative impact of new production and reduced consumption could increase real U.S. gross domestic product (GDP) by 2%-3.3%, or by $370 billion-$624 billion, by 2020.
Of this estimate, $74 billion comes directly from the output of new hydrocarbon production alone. The rest is generated by multiplier effects as the surge in economic activity drives higher wealth, spending, consumption and investment effects that ripple through the economy. This potential re-industrialization of the U.S. economy is both profound and timely, occurring as the U.S struggles to shake off the lingering effects of the 2008 financial crisis.
Equally remarkable is the potential impact on the U.S. labor market. We estimate that as many as 3.6 million new jobs may be created on net by 2020. Some 600,000 jobs would be in the oil and gas extraction sector, another 1.1 million jobs in related industrial and manufacturing activity, and the remainder in ancillary job sectors. Overall, the national unemployment rate could decline by as much as 1.1 percentage points from what it otherwise would be in 2020.
Another potentially dramatic consequence of the North American hydrocarbon revolution is the impact on the U.S. current account deficit. The deficit, currently running at negative 3% of GDP, may be reduced by anywhere from 1.2% of GDP to 2.4% of GDP. This would also have implications for the U.S. dollar, potentially helping it appreciate by 2% to 5% in real exchange-rate terms, reversing its long-term decline and maintaining its status as the global reserve currency of choice.
It is now possible to meet the goal of energy independence for the U.S. One consequence is a significantly lower vulnerability of North America—and the world market—to oil price spikes. But also significant are the geopolitical consequences of a weakened OPEC and of the potentially reduced importance to the U.S. of changes in oil- and natural gas-producing countries world-wide.
Mr. Morse is head of global commodities research at Citi and a former State Department official.
Posted by MS at 5:31 PM