Feel-Good Environmentalism at the U.N. ignores the dominant issues of water & air pollution


Feel-Good Environmentalism at the U.N.

Why do the global glitterati ignore water and air pollution?

The United Nations environment summit in Rio this week is a great example of how good intentions can thwart real progress on global problems.
What's the world's biggest environmental challenge? Ask the global elites at U.N. conferences, and they're likely to answer: "global warming." Global warming is indeed a concern, and we need smart solutions. But let's put things in perspective. According to statistics from the emergency disasters database, deaths caused by flooding, droughts, heat waves and storms—including the effects of global warming—now account for about one-twentieth of one percent of all deaths in the developing world. From 1990-2007, that averaged about 27,000 deaths per year.
By contrast, lack of access to clean drinking water and sanitation kills almost three million annually. Almost two million people, meanwhile, die each year inhaling smoke from inefficient and dirty fuels such as dried animal dung, crop residues and wood. Another one million die from the effects of outdoor air pollution.
All told, more than 13% of Third World deaths—about six million in total—stem from air and water pollution. This means that for every global warming-related death, at least 210 people die each year from old-fashioned air and water pollution. 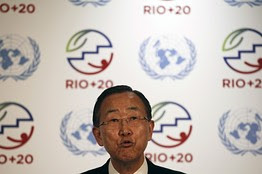 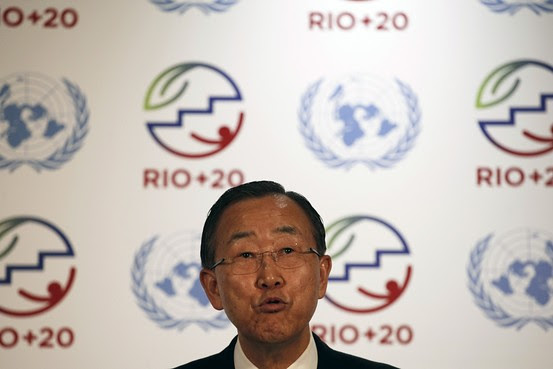 Reuters
U.N. Secretary General Ban Ki-Moon at the Rio+20 United Nations sustainable development summit in Rio de Janeiro on Wednesday.
Even an extremely ambitious climate policy—aiming to cut global carbon-dioxide emissions by 50% below 1990s levels—would entail enormous costs but save very few lives. Inexpensive policy changes, however, could virtually eliminate pollution-related deaths, which are so much more numerous than global warming-related ones.
Why then, do U.N. elites focus all their efforts on a feeble attempt to assist one person before successfully preventing 210 deaths? Because global warming feels more important—more hip. The majority of people in wealthy countries have lived their entire lives with clean air, clean water and electricity supplied through a grid. Air and water pollution is just old hat.
But surely "helping the world" isn't about making us feel good. It's about actually helping poor nations.
Nowhere are these misplaced priorities more apparent than in U.N. Secretary-General Ban Ki-Moon's favorite program, "sustainable energy for all," which has emerged as a key goal of this year's summit. The program aims to ensure that all people have access to energy, but it places an inordinate emphasis on "green" technologies.
The program's celebrity backers correctly point out that 1.3 billion people lack electricity, meaning it's "lights out" when the sun goes down. They rightly anguish that three billion people rely on dirty fuels. But then they argue that "green" energy is the way to help.
Why would we choose inefficient, intermittent and costly technologies to solve a simple problem? Simply put: Because it makes us feel good.
Take former Norwegian Prime Minister Gro Harlem Brundtland, a member of Mr. Ban's global sustainability panel. In a recent statement, she gave perhaps the starkest example of attempting to solve a substantial problem with a feel-good policy: "Smoke from wood, dung and coal from cooking and heating remains one of the world's major public health problems. Major investment is needed to accelerate the move away from carbon fuels and to improve energy efficiency."
Sure, sometimes solar panels in far-flung communities can work. But generally, reliable electricity for those billion-plus people who lack it should come from simple, cheap solutions like hooking up generators or, better yet, power plants—which, just like ours, mostly run on fossil fuels.
The same goes for tackling indoor air pollution. In some circumstances, solar cookers can be a good idea. But the technologies that have served us well, such as kerosene and natural gas, are much more likely to be cheap, flexible and useful for hundreds of millions of people.
It's the height of arrogance to think that Third World countries should use weak and expensive technologies just to make some in the West feel good. In essence, the global elite is telling coughing Third World people sitting in their dark hovels: "Get a solar panel." That's akin to telling people suffering from water pollution to drink Perrier. Or indeed, to suggest that breadless people should eat cake.
There are real and often overlooked environmental problems to be tackled. We need to talk less about ineffective, "feel-good" solutions to global warming and more about smart fixes to air and water pollution. We need to take back our environmental summits from the well-meaning glitterati and do what works.
Mr. Lomborg is an adjunct professor at the Copenhagen Business School and the author of "The Skeptical Environmentalist" (Cambridge Press, 2001) and "Cool It" (Knopf, 2007).
Posted by MS at 9:20 AM