New paper finds Arctic was up to 12.6°C warmer than today

A paper published today in Palaeogeography, Palaeoclimatology, Palaeoecology reconstructs temperatures from Bylot Island in the Canadian Arctic during the late Pliocene epoch and finds mean annual temperatures were 11.4°C warmer than present-day temperatures. The authors also find June-July temperatures were "approximately 12.6°C warmer than present-day." The paper reconstructs temperatures using tree-rings from a fossilized forest that grew on Bylot Island, which is covered by ice and permafrost today. The paper adds to many other peer-reviewed papers demonstrating that the Arctic has been much warmer than modern times during many periods in the past, and without causing any "tipping points" as claimed by climate alarmists for more than 2°C warming. 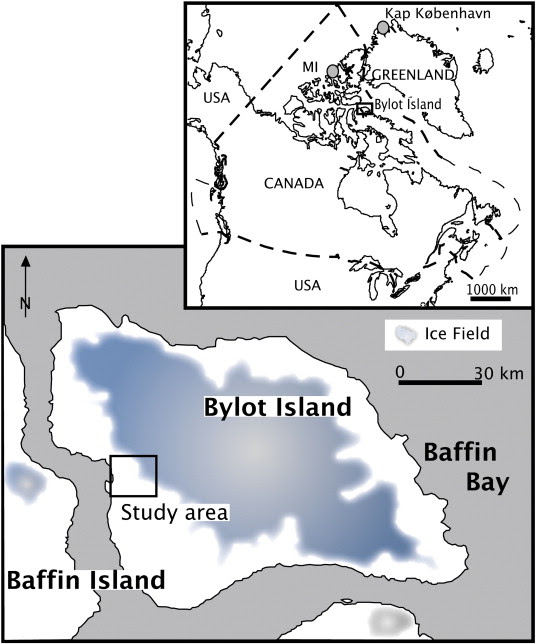 Here we use δ18O ratios measured in tree rings of crossdated sub-fossil wood to reconstruct an annually resolved record of temperature and δ18O of meteoric water for an interglacial late Pliocene–early Pleistocene fossil forest found on Bylot Island, Nunavut, Canada. Our record represents the first crossdated record of Pliocene wood. Mean annual temperatures determined in this study average − 3.4 ± 3.8 °C, which is 11.4 ± 4.4 °C warmer than present-day Bylot Island (− 14.8 ± 2.2 °C). June–July temperatures average 13.5 ± 1.1 °C, approximately 12.6 ± 1.6 °C warmer than present-day. Meteoric water δ18O values average − 15.5 ± 2.9‰, ~ 2–6‰ more enriched than present values of precipitation δ18O. Our temperatures are comparable to mid-Pliocene modeled temperatures for the Arctic (3–5 °C warmer than present), suggesting that interglacial warm periods in the late Pliocene–early Pleistocene may have been as warm as the mid-Pliocene warm period. That both the Bylot Island forest deposit and the Kap København deposit represent the remains of northern tree-line vegetation that lived during warm interglacial periods within the overall cool Plio-Pleistocene suggests that forest deposits in the Arctic capture a snapshot of interglacial conditions during the Plio-Pleistocene rather than the average Pliocene climate and may not be suitable records to study Pliocene cooling.

► Annually resolved Plio-Pleistocene Arctic temperatures from fossil wood tree rings. ► This is the first crossdated series of Plio-Pleistocene wood. ► Using isotopes and ring widths avegae MAT was -3.4 ± 3.8 °C ► The average reconstructed June-July temperature was 13.5 ± 1.1 °C. ► Interannual variability was 1.5° C with no clear trend over the 120 year record.
Posted by MS at 12:56 PM