EPA is doubling down on flawed science

WSJ.COM 2/15/13:  WASHINGTON—President Barack Obama is moving toward naming a veteran clean-air expert to head the Environmental Protection Agency, in a signal of his intent to make climate change a priority in his second term.
Gina McCarthy, a 58-year-old Boston native who once worked for Gov. Mitt Romney, has emerged as the top contender to take over the EPA, according to people familiar with the matter. She would formally succeed Lisa Jackson, who officially left the agency's top post Thursday. 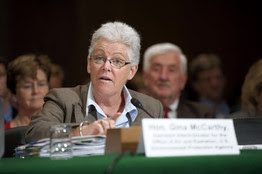 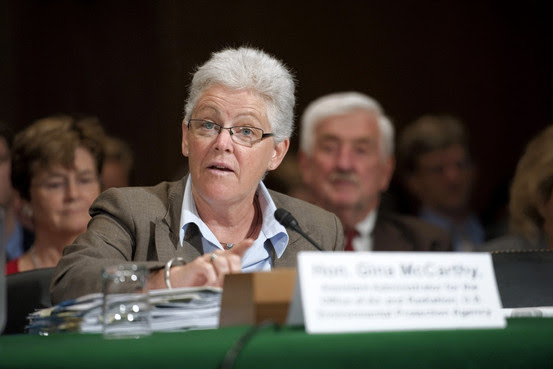 Congressional Quarterly/Getty Images
Gina McCarthy
A McCarthy nomination would likely face opposition from Republicans, over the agency's actions in general and the role she played in directing them. And while business groups generally see her as an EPA official they can work with, coal producers and owners of coal-fired power plants are worried about potential EPA greenhouse-gas rules.
Ms. McCarthy has led the EPA's clean-air division for the past four years and has pushed through some of Mr. Obama's most significant environmental rules, including higher fuel-efficiency standards for cars.
She has already been a central player in developing greenhouse-gas rules proposed last year that would effectively rule out new coal-fired power plants using existing commercially viable technology.

2003-04 Massachusetts deputy secretary of the Office of Commonwealth Development
2004-09 Connecticut commissioner of the Department of Environmental Protection
2009-present Environmental Protection Agency, assistant administrator for air and radiation
Education
The agency in the next year or two is likely to decide what to do about existing coal-fired plants, the largest stationary source of greenhouse-gas emissions. Critics say such rules could threaten the reliability of the power grid and raise consumer electricity prices.
Last year, Ms. McCarthy said the risks from climate change were "substantial and far-reaching," a message that has been amplified by the president in his second inaugural and State of the Union addresses. Mr. Obama said at the State of the Union that he would direct his administration to tackle climate change through executive action if, as expected, Congress fails to pass legislation cutting greenhouse-gas emissions.
The EPA declined to comment about the selection of Ms. Jackson's successor. The people familiar with the matter said the choice of Ms. McCarthy hasn't been made final yet. EPA Deputy Administrator Bob Perciasepe has also been named as a possible successor to Ms. Jackson. Mr. Perciasepe, 61, will serve as acting administrator until a permanent chief is confirmed by the Senate.
Ms. McCarthy, who was confirmed by the Senate in 2009 for her current role, has faced heated questions from lawmakers over the agency's air standards in more recent congressional hearings.
The top Republican on the Senate committee that will consider the EPA nomination, Sen. David Vitter of Louisiana, expressed his frustration with getting the agency to answer his requests for the scientific basis for its rules. "The administration should be looking for someone who will end the standard of ignoring congressional requests, undermining transparency and relying on flawed science. Instead, it looks like they may double down on that practice," he said.
Sen. James Inhofe (R., Okla.), another leading voice on environmental issues, said: "I have concerns about her position on coal and other fossil fuels." Sen. Roy Blunt (R., Mo.) suggested this week he might put a hold on the next EPA administrator's nomination because of concerns about delays in evaluating a long-planned floodway project in his state.
Ms. McCarthy won praise from Sen. Richard Blumenthal (D., Conn.) who worked with her when both were Connecticut state officials. "She recognizes that sometimes there's a balance that has to be struck between environmental emphasis and economic growth, but she's convinced the two are often mutually supportive," Mr. Blumenthal said in an interview.
Before joining the EPA, Ms. McCarthy served as the top environmental watchdog under two former Republican governors—Mr. Romney in Massachusetts and, later, Jodi Rell in Connecticut. While working for Mr. Romney, Ms. McCarthy was part of the push by Northeast states to force the EPA to take action on greenhouse-gas emissions. The fight led to a landmark 2007 Supreme Court decision that said greenhouse gases should be regulated under the Clean Air Act. The decision serves as the bedrock of the EPA's current work to regulate carbon emissions.
In Connecticut, Ms. McCarthy and Mr. Blumenthal, then state attorney general, moved the state into a regional greenhouse-gas trading plan and sued out-of-state power companies whose emissions drifted into Connecticut and affected the state's air.
Ms. McCarthy is liked by environmental groups, which applaud her work at the EPA and her defense of some of the most sweeping environmental rules of Mr. Obama's first term.
Some industry officials view Ms. McCarthy as a less polarizing figure than Ms. Jackson and say it is better to have an experienced regulator at the helm than an outsider.
"We have a decent relationship with Gina McCarthy," said Nick Akins, chief executive of American Electric Power, a Columbus, Ohio-based utility that relies heavily on coal-fired power plants. "She seems receptive, but I don't know what that means in the end" for the shape of future regulation, he said.
Ms. McCarthy gets credit among industry lobbyists for playing a central role in lowering costs for power plants complying with a strict new rule on mercury and other toxic emissions. The final rule was more flexible than the one initially proposed and required fewer plants to install pollution controls or shut down.
Posted by MS at 1:05 PM