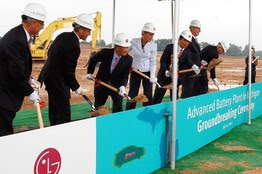 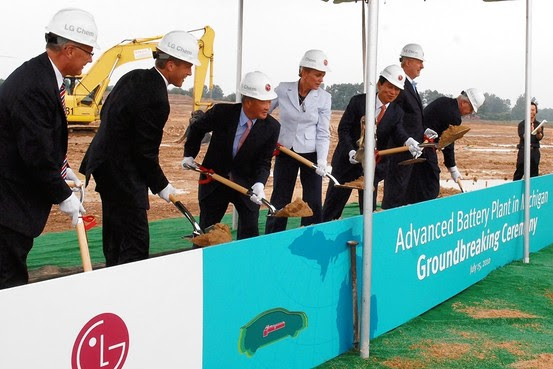 European Pressphoto Agency
LG Chem never scaled up a Michigan plant's output. Above, the groundbreaking ceremony in 2010.
When demand for the plant's batteries didn't meet expectations, the company filled orders with cells made at a factory in South Korea, leaving the Michigan plant largely idle, according to the report by the Department of Energy's Inspector General, Gregory Friedman.
LG Chem said in a statement that production delays at the Michigan facility were "market-driven," adding that it is "developing specific plans for the start of production." The company said it regretted that it applied for reimbursement for "employment costs that were not allowed" under its U.S. grant.
The inspector general said that to avoid layoffs at the factory LG Chem paid idle workers $1.6 million in the third quarter of last year, about half of which was covered by its U.S. grant, even though there was nothing for them to do. The workers played board games, watched movies, and volunteered at local animal shelters during regular work hours, Mr. Friedman said. LG Chem has since paid back the government's share of those charges.
"Until the shift in production takes place or some alternative use for the plant is developed, U.S. taxpayers will receive little direct benefit from a plant for which they provided up to half of the funding," Mr. Friedman said in his report.
In 2010, Mr. Obama attended the plant's groundbreaking and said such grants would "unleash private sector growth" and called the factory "a symbol of where America is going." The facility today has about 150 workers, some of whom are hourly employees and are furloughed one week a month.
LG Chem is the latest of several recipients of federal funds, including solar panel maker Solyndra LLC, that haven't panned out. Solyndra filed for bankruptcy in 2011. The inspection report on the Electric Drive Vehicle Battery and Component Manufacturing Initiative grant came a day after President Barack Obama lauded U.S. efforts to invest in alternative energy.
"Four years ago, other countries dominated the clean energy market and the jobs that came with it. And we've begun to change that," Mr. Obama said in Tuesday's State of the Union address.
The DOE initiative that funded LG Chem's factory in total provided about $2 billion in grants to more than two dozen companies building advanced batters and other components for hybrid and electric cars.
Another recipient, A123 Systems Inc., got about $250 million in federal funds for plants in Michigan. It filed for bankruptcy in October and its automotive assets have been sold to a Chinese auto-parts firm. The new owner is expected to continue operating in the U.S.
The Department of Energy's deputy assistant secretary in charge of the grant program, Kathleen Hogan, said in a written response to Wednesday's report that the funding for LG Chem was part of an effort to "continue to grow the manufacturing sector in the United States." She said the electric vehicle industry "hasn't grown quite as quickly as expected," but will become "an enormously valuable and growing market."
Mr. Friedman's report said that while LG Chem had said it planned to move battery production to Michigan from South Korea, there was no explicit requirement for it to do so in order to receive federal funds. The company built three of five planned production lines, but underestimated labor costs—apparently unaware of a requirement that it pay prevailing wages—and no longer has enough grant money to complete production.
The facility has produced test battery cells, but none have equipped Chevrolet Volts. LG Chem officials told Mr. Friedman's office that shifting production to Michigan now would "result in financial losses on battery cells produced in the U.S.," according to the report.
Demand for the Volt and other electric vehicles has been below expectations. The Michigan plant was to have the capacity to produce enough battery cells to equip 60,000 vehicles a year. GM sold 23,641 Volts in the U.S. 2012.
A GM spokeswoman said it was the auto maker's understanding that LG would build a U.S. plant to supply Volt battery cells. She declined further comment on the plant's activities.
Rep. Lamar Smith, a Texas Republican who is chairman of the House Science Committee, called the LG Chem case an "outrage." "The president wants more money to fund more pet projects, but it is clear that his administration hasn't been responsible with what they've already been given," Mr. Smith said in a statement.
Posted by MS at 2:10 PM