A paper published today in Palaeogeography, Palaeoclimatology, Palaeoecology finds sea levels in Uruguay were 4 meters higher than the present during the mid-Holocene ~5500 years ago. According to the paper, after 4,300 years ago, there was a constant sea level decline of 4 meters to present sea levels. 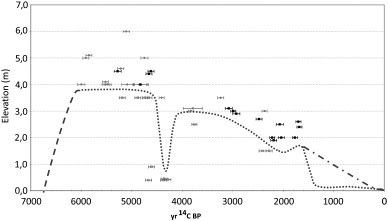 A reply to “Relative sea level during the Holocene in Uruguay”

Martínez and Rojas (2013) published a paper about the relative sea level during the Holocene in Uruguay. The paper of Martínez and Rojas could be handled as an attempt to construct a sea-level curve from data collected from different sources: open-ocean coast, the Río de la Plata coastline and the outlet of Uruguay River. In this sense, several processes were involved: storm effects at open-ocean beaches, the Holocene enclosing of coastal lagoons, storms within the funnel-shaped estuary and the floods of the Uruguay River. However, they included a series of omissions, inaccuracies, errors and critics to our work, that need to be amended, rectified and argued. In response we present a historical background about the research on this issue in Uruguay. We refute the comments about the empirical framework used to construct the first sea-level curve for Uruguay (Bracco et al., 2008, 2011b). We point out that the assumptions on which the curve proposed by Martínez and Rojas (2013) is based are mistaken. In addition, there are limitations of the performed statistical techniques, and errors — mainly systematic — within their formulation. We present evidence that the decrease in sea level from middle Holocene would not have been constant. Instead, a rapid sea level decrease would have taken place by 4300 yr BP. Finally, we not only compare our sea level curve with that proposed by Martínez and Rojas, but also we corrected the altimetry errors incurred in their formulation. We conclude that the similarity supports the validity of our curve.
Posted by MS at 11:09 AM