A paper published in Proceedings of the National Academy of Sciences finds trees in Southern California were starved of CO2 during the last glacial period from 7,700 to 55,000 years ago, at near the lowest levels that can sustain photosynthesis.

According to the authors, CO2 level "ranged between 180 and 220 ppm during glacial periods, rose to ≈280 ppm before the industrial period, and is currently approaching 380 ppm [400 ppm currently] in the modern atmosphere," and "glacial trees were undergoing carbon starvation."

Alarmist organizations such as 350.org claim CO2 must be reduced to 350 ppm, or even as low as 300 ppm, to "save the planet," which flies in the face of thousands of scientific papers demonstrating that CO2 fertilization significantly improves plant productivity and resistance to drought, and dramatically greens the planet. Current levels of CO2 are very low in comparison to the past 500+ million years, and most plant and animal life evolved on Earth with CO2 levels 10 or more times higher than the present.

In addition, the authors paradoxically find "glacial humidity was ≈10% higher than that in modern times, indicating that differences in vapor-pressure deficits did not impose additional constrictions" on photosynthesis. This is interesting given that climate models assume specific humidity greatly increases to create a positive feedback in a warmer climate [while relative humidity remains stable], but this paper suggests humidity was instead ~10% higher during the last ice age. 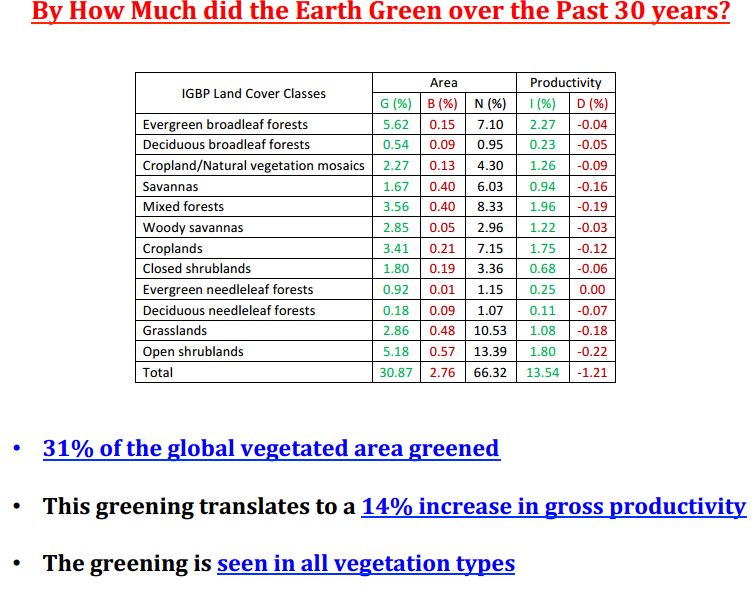 For the Full Report in PDF Form, please click here.

For the Full Report in PDF Form, please click here.


The Rancho La Brea tar pit fossil collection includes Juniperus (C3) wood specimens that 14C date between 7.7 and 55 thousand years (kyr) B.P., providing a constrained record of plant response for southern California during the last glacial period. Atmospheric CO2 concentration ([CO2]) ranged between 180 and 220 ppm during glacial periods, rose to ≈280 ppm before the industrial period, and is currently approaching 380 ppm in the modern atmosphere. Here we report on δ13C of Juniperus wood cellulose, and show that glacial and modern trees were operating at similar leaf-intercellular [CO2](c i)/atmospheric [CO2](c a) values. As a result, glacial trees were operating at c i values much closer to the CO2-compensation point for C3 photosynthesis than modern trees, indicating that glacial trees were undergoing carbon starvation. In addition, we modeled relative humidity by using δ18O of cellulose from the same Juniperus specimens and found that glacial humidity was ≈10% higher than that in modern times, indicating that differences in vapor-pressure deficits did not impose additional constrictions on c i/c a in the past. By scaling ancient c i values to plant growth by using modern relationships, we found evidence that C3 primary productivity was greatly diminished in southern California during the last glacial period.
Posted by MS at 5:42 PM