A paper published today in Quaternary Science Reviews reconstructs temperatures in central Asia over the 1074 years from 931 A.D. to 2005, and which shows another non-hockey-stick with temperatures during the Medieval Warm Period around 1000 AD of 18C, the same as reconstructed temperatures of 18C at the end of the record in 2005.

Although the authors claim "recent warming exceeds any other time in the reconstruction," the observational data shows that the warming peak from 2000-2005 resolved by the end of the record in 2010 to the same temperatures observed in 1940. Further, the warming peak 2000-2005 is within the error estimates (shown in grey below in graph b) during the Medieval Warm Period ~1000 years ago, and the rate of warming from ~950 to 1050 faster than during the 20th century. 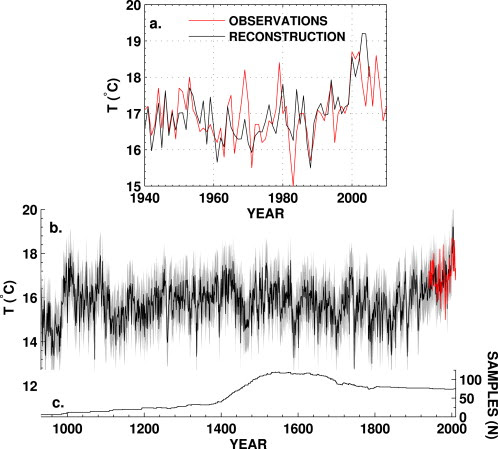 •
We reconstruct temperature in Mongolia from 931 to 2005 C.E.
•
Recent warming exceeds any other time in the reconstruction.
•
We find general agreement with the Medieval Climate Anomaly and Little Ice Age trends.
•
We observe evidence of significant volcanic influence on Mongolia.

Warming over Mongolia and Central Asia has been unusually rapid over the past few decades, particularly in the summer, with surface temperature anomalies higher than for much of the globe. With few temperature station records available in this remote region prior to the 1950s, paleoclimatic data must be used to understand annual-to-centennial scale climate variability, local response to large-scale forcing mechanisms, and the significance of major features of the past millennium such as the Medieval Climate Anomaly (MCA) and Little Ice Age (LIA) both of which can vary globally. Here we use an extensive collection of living and subfossil wood samples from temperature-sensitive trees to produce a millennial-length, validated reconstruction of summer temperatures for Mongolia and Central Asia from 931 to 2005 CE. This tree-ring reconstruction shows general agreement with the MCA (warming) and LIA (cooling) trends, a significant volcanic signature, and warming in the 20th and 21st Century. Recent warming (2000–2005) exceeds that from any other time and is concurrent with, and likely exacerbated, the impact of extreme drought (1999–2002) that resulted in massive livestock loss across Mongolia. [note other papers have blamed this upon concurrent La Nina conditions]
Posted by MS at 4:01 PM