A new paper published in Climate of the Past Discussions reconstructs temperatures from 12 ice cores in Northern Greenland over the past 1100 years and demonstrates temperatures during the Medieval Warm Period beginning ~1065 years ago were warmer than at the end of the record in 2000. In addition, the data shows temperatures ~1450 AD (during the Little Ice Age) and from 1920-1940 were also considerably warmer than the latter 20th century, the opposite of expectations of anthropogenic warming theory:

In addition, the paper shows a reconstruction of August Arctic sea ice extent over the past 1000 years (purple line in middle graph below) demonstrating that sea ice at the end of the record in the late 20th century was near the average of the past millenium and about the same as during the Medieval Warm Period: 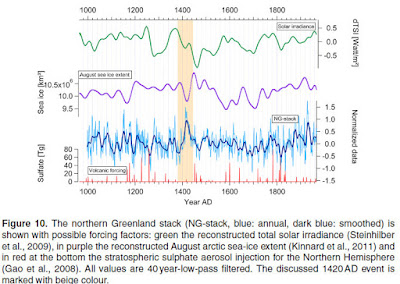 Received: 07 May 2015 – Accepted: 02 June 2015 – Published: 23 June 2015
Abstract. We present for the first time all 12 δ18O records obtained from ice cores drilled in the framework of the North Greenland Traverse (NGT) between 1993 and 1995 in northern Greenland between 74 to 80° N, 36 to 49° W and 2000 to 3200 m a.s.l. The cores cover an area of 680 km × 317 km, ~200 000 km2 or 10 % of the area of Greenland. Depending on core length (100–175 m) and accumulation rate (90–200 kg m−2 a−1) the records reflect an isotope-temperature history over the last 500–1100 years. The δ18O signal in northern Greenland is influenced by temperature, accumulation and the topography of the North Greenland ice sheet between 72 and 80° N. About 12 % of the variability can be attributed to the position of the single drill sites in relation to the ice sheet topography. Lowest δ18O mean values occur north of summit and east of the main divide. In general, ice cores drilled on the main ice divide show different results than those drilled east of the main ice divide that might be influenced by secondary regional moisture sources. A stack of all 12 NGT records and the NGRIP record is presented with improved signal-to-noise ratio. This stack represents the mean δ18O signal for northern Greenland that is interpreted as proxy for temperature. Our northern Greenland δ18O stack indicates isotopically enriched periods compared to their average during medieval times, about 1420 ± 20 AD and from 1870 AD onwards. The period between 1420 AD and 1850 AD was isotopically depleted compared to the average for the entire millennium and represents the Little Ice Age. The 20th century has isotopic values higher than the 1000 years mean and is comparable to the medieval period but lower than about 1420 AD.
Posted by MS at 5:04 PM