Erasing AGW: How Convection Responds To Greenhouse Gases To Maintain The Hydrostatic Equilibrium Of The Atmosphere

Guest post by Stephen Wilde, who has been a member of the Royal Meteorological Society since 1968.

This article is complementary to Stephen Wilde’s earlier works at:

and is consistent with the cause of the so called greenhouse effect being atmospheric mass held off a surface within a gravitational field and subjected to insolation.

Convective overturning within any horizontal layer of gases around a planet and held off the surface against the force of gravity revolves around the point where the upward pressure gradient force within the atmosphere achieves hydrostatic balance with the downward force of gravity. At that point kinetic energy (KE or heat) matches potential energy (PE which is not heat) in any molecules present.

It is Earth’s surface temperature enhancement of 33K above the temperature predicted by radiative physics that provides the kinetic energy required at the surface to maintain the upward pressure gradient force. That kinetic energy is locked into constant convective overturning and cannot be radiated to space without the mass of the atmosphere falling to the surface.

If tropopause height is raised by upward convection by the force of rising air from below then it must descend at some other location where the force of uplift is absent or less strong. Thus tropopause height will always be irregular and fluctuating up and down from place to place. Uneven surface heating causing density variations in the horizontal plane makes convective overturning unavoidable with or without GHGs.

Rising air has enough kinetic energy (KE) to overcome the downward force of gravity which seeks to both pull down and compress gases. That downward force can conveniently be represented by the quantity of potential energy (PE) held by atmospheric molecules suspended off the surface.

It follows that descending air does not have sufficient KE to overcome the downward force of gravity. PE can then be said to exceed KE.

At the surface, molecules contain only KE and as height is gained PE takes over from KE because as molecules rise into regions of lower density they move further apart and vibrate less. Kinetic energy (heat) is transformed into potential energy which is not heat and does not radiate.

For Earth’s troposphere, molecules involved in convection can only rise as far as the tropopause because at that level there is an inversion layer containing warmer, lighter air.  Colder, denser air, being heavier, will always remain at a lower height than warmer, lighter air.

This diagram shows the essential features: 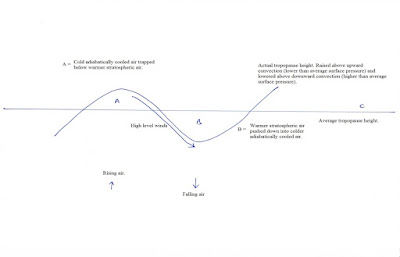 The coldest air is found at the top of section A having been cooled by adiabatic ascent and held at that height by warmer lighter air pushing up from below. If convection is enhanced by GHGs absorbing IR from the ground then that will tend to push convection higher than if there are no GHGs and produce more upward distortion of tropopause height above ascending columns. Section A becomes larger as does section B. Section A is then storing more PE than before and, as long as non-condensing GHGs remain present in an atmosphere, that greater energy storage facility in section A is permanent. More GHGs leads to more energy storage in section A.

PE is not heat and does not radiate.

Since warmer, lighter air continues to move upwards beneath it, that cold air at the top of section A is forced to displace sideways but being colder, denser and heavier air than the air in section B (and beneath section B) it will be forced downwards as shown above . Due to the Coriolis force it circles around in high level winds from the top of a low pressure cell containing ascending cooling air towards the nearest high pressure cell containing descending warming air, descending and warming adiabatically as it does so.

The important point to note is that due to the temperature and pressure gradient within the troposphere the surroundings will warm and become denser at the same rate as the descending cold air from the top of section A warms and compresses.

Air being a poor conductor we can ignore conduction in and out of the descending parcel of air for present purposes.

Let us look at the consequences for the lapse rate structure of the tropopause in that situation: 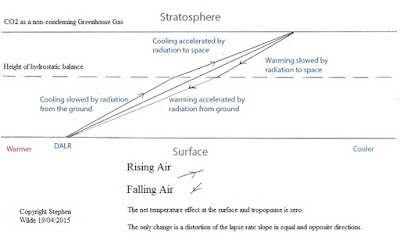 Below that point KE starts being added via radiative absorption from the ground by the GHGs in the descending column which slowly warms to the surface temperature it would have attained with no GHGs present.

The CO2 emissions gap at the top of the atmosphere as viewed from space is caused by the absorption of IR from the surface in both ascending and descending columns below the height of hydrostatic balance.

Due to the additional storage of KE as PE in the expanded section A at the top of the atmosphere the surface temperature need not rise. The distortion of the lapse rate slope to the warm side in the ascending column is enough to provoke enhanced uplift without the surface needing to be warmer.

AGW theory mistakenly relies on the lapse rate not being distorted so that the surface temperature needs to be higher to enhance convection.

At the bottom of the descending column, surface temperature rises above the temperature predicted by radiative physics via the so called S-B equation with or without GHGs because the descending air is inhibiting upward convection, just like a greenhouse. That is why sunny deserts beneath semi-permanent descending high pressure cells get hot in the daytime. It then takes time for surface winds to transfer the excess surface energy to the nearest region of convective uplift and it is that delay averaged globally that raises surface temperature 33K above S-B whether GHGs are present or not.
That process is a consequence of atmospheric mass absorbing insolation from the heated surface by conduction and convection and not downward radiation from greenhouse gases as proposed by AGW theory.

Any downward radiation towards the surface alters the local hydrostatic pressure at height between the surface and the absorbing GHG molecule which conducts KE to adjoining non GHG molecules putting the local pressure gradient force out of balance with the gravitational force so that the warmed molecules rise spontaneously due to their lower density. In the process of rising they cool by decompression but whilst rising they remain warmer than they should be for their position along the DALR because their surroundings cool at the same rate as they ascend adiabatically. That is where the DALR distortion to the warm side comes from and that is what enhances upward convection rather than any surface warming.

Exactly the opposite occurs in the descending column (all the molecules are cooler than they should be for their position along the DALR because the GHGs have caused the ascending column to rise to a higher colder location and KE has been taken out and stored permanently in section A so that it is no longer available for recovery at the surface in convective descent.

In the above diagram Section A represents the sum total of the tops of all ascending columns around the globe. As some dissipate they are replaced by others so the average global volume of all sections A remains the same.

The net thermal effect from the GHGs is zero when the two columns are averaged which is why the diagram shows the lines all converging at the same local temperature at both surface and tropopause.

GHGs cause section A in the above diagram to be higher and colder (with more PE) than it otherwise would be. The only KE which is recovered from PE during the subsequent descent and then radiated out from the surface is that which is not stored permanently in the expanded Sections A i.e. the original quantity for a GHG free atmosphere.

A GHG such as CO2 blocks certain wavelengths from escaping the atmosphere to space but since the convective adjustment returns kinetic energy back towards the surface the blocked wavelengths are simply reconverted to the whole range of wavelengths again at the surface.

The wavelength changes when that KE returns to the surface for another chance at upward emission to space ensure that the blocking effect of the GHGs is overcome by more radiation escaping to space directly from the surface otherwise the sections A would keep expanding indefinitely.

Note that here we are discussing only two radiatively active ‘pipes’ for the exit of radiative energy to space, namely GHGs within the atmosphere and the surface.

For a more complex atmosphere with other types of radiatively active material such as other GHGs, water vapour condensate and inorganic or organic particulates then the other ‘pipes’ will also be active and take over more of the compensating radiation to space.

That is why, for Earth, the surface only radiates a little more to space when GHGs increase. The other ‘pipes’ are helping it out. If those other ‘pipes were not present it would all happen from the surface. If there were no GHGs water vapour or particulates at all then the lapse rate structure would look like this: 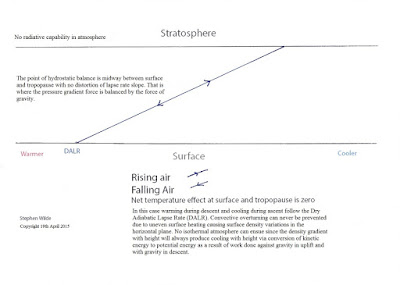 This scenario would involve ALL radiation escaping directly to space from the surface when there is no radiative capability in the atmosphere. There is inevitably still convective overturning and no isothermal atmosphere even in that situation.

Every atmosphere has a decline in density and temperature with height as long as it is held off the ground against the force of gravity in hydrostatic balance.

All mass has some radiative capability, even oxygen and nitrogen and there will always be aerosols and particulates so the above diagram is an idealised one. In reality there would always be some distortion of the DALR in both ascent and descent.

For a condensing GHG such as water vapour and no other ‘pipes’ other than the surface, the lapse rate structure looks like this: 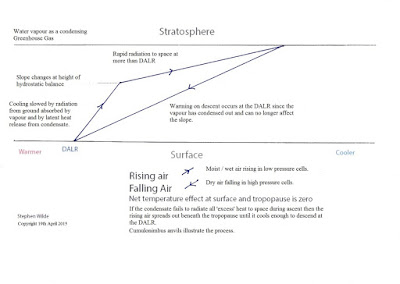 There will be condensate in the form of clouds at various heights in this case and such condensate radiates readily to space depending on height and density hence the faster decline in temperature with height above the point of hydrostatic balance. Because of the wide variability of cloud types, heights and densities the height of the point of hydrostatic balance varies constantly within rising columns of air containing water vapour.

The infinitely variable lapse rate structure available in three dimensions around a rotating sphere stabilises any thermal effects from everything else by causing variable convection which leads to variations in tropopause height so as to deposit surplus KE into the atmospheric PE reservoir or draw it out as necessary to maintain stability. In the process there are changes in the balance of radiation escaping to space from each of any available ‘pipes’ and if there are none other than the surface then the surface alone it will be.
Posted by MS at 1:22 PM