Reblog of a new post by materials physicist Dr. Charles Anderson, which discusses the recent paper by Chilingar et al posted here. Dr. Anderson improves upon some aspects of the paper, but in general comes to the same basic conclusion that additions to the present levels of the greenhouse gases CO2, H2O, and methane will cause cause cooling, not warming, of the Earth surface & atmosphere.

where S is the total solar insolation or radiation, A is the albedo or the fraction of the solar radiation reflected without absorption by the Earth system, and the factor of 4 is the average reduction of solar flux due to the projection of a rotating sphere onto a disk in the daily cycle.  However, the Earth has a precession angle of ψ = 23.44° or 0.4094 radians relative to its rotational axis.  According to Sorokhtin, Chilingar, Khilyuk and Gorfunkel in Evolution of the Earth’s Global Climate, Energy Sources, Part A, (2007), 1-19 and Sorokhtin, Chilingar and Khilyuk, Global Warming and Global Cooling: Evolution of Climate on Earth, Elsevier, Amsterdam (2007), p.313, the correction factor for the precession effect, ø, replaces the factor 4 in the divisor above with 4ø, where ø is

So if the present average temperature of the Earth is taken to be 288.2 K, the net warming effect of all of the present infra-red active gases is 9.8 K.  This is a far cry from the 33 K warming effect which is often claimed as the result of the so-called greenhouse gas effect.  But it is true that without the so-called greenhouse gases, the Earth’s surface would be cooler than it is now because the surface itself would be in radiative equilibrium with space instead of a combination of the surface, a more heavily weighted altitude at the top of the troposphere, and a much lighter weighting of the stratosphere. 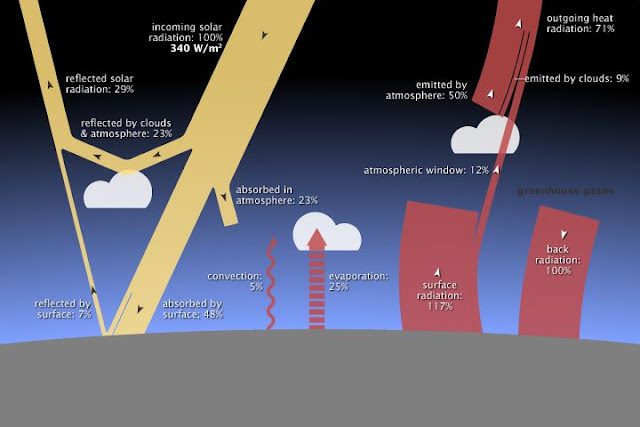 There are many effects that are caused by the infra-red active gases.  The first molecules of these gases added to the atmosphere were able to absorb energy that would otherwise have been radiated directly from the surface straight out into space.  That absorbed energy was then most often transferred to non-active infra-red molecules of nitrogen, oxygen, and argon gas which then mostly transported the energy upward by convection processes until the energy was deposited in the atmosphere where the molecular collision rate was lower and the mean free path for infra-red energy absorption was longer.  This absorption effect is large at first, but becomes rapidly smaller as the number of infra-red molecules becomes larger.  Other effects do not shrink as rapidly or at all as the number of infra-active molecules increases, however.  For instance, water vapor and CO2 also absorb incoming solar insolation in the atmosphere and that absorption is less saturated at the present concentrations of water vapor and CO2 in the atmosphere.  This is a surface cooling effect in that the radiation never arrives at the surface to warm it.  The differential effects of water vapor and CO2 compared to N2 and O2 on the heat transported by convection scale linearly with the increase in water vapor and CO2, so they do not diminish as their concentrations are increased.  Water vapor condensation in the atmosphere also increases linearly with the amount of water vapor.

So, it is not a foregone conclusion that adding CO2 to the present mix of gases in the Earth atmosphere will cause further warming, just because the additions of the first molecules did cause warming.  We do not immediately know whether the so-called greenhouse effect is increasing or decreasing with further additions of greenhouse gases.  This is a question I have been discussing for years on this blog and since I wrote a book chapter called "Do IR-Absorbing Gases Warm or Cool the Earth’s Surface?, in Slaying the Sky Dragon -- Death of the Greenhouse Gas Theory, Stairway Press, published in January 2011.  Of course, the presence of water on the Earth’s surface and water vapor in the atmosphere causes the Earth’s surface to be warmer than it would be without water, but unlike the common assumption, this does not tell us that further additions of the so-called greenhouse gases will cause further warming.  I have many times explained why the physics commonly and vaguely offered as the reason why such gases would continue to warm the Earth’s surface is wrong.

The recent paper by G.V. Chilingar, O.G. Sorokhtin, L.F. Khilyuk, and M. Liu entitled Do Increasing Contents of Methane and Carbon Dioxide in the Atmosphere Cause Global Warming?, Atmospheric and Climate Sciences, Vol.04 No.05 (2014), Article ID:51443 addresses this question.  They note that the adiabatic temperature distribution with pressure p, gas heat capacity at constant pressure of cP and heat capacity at constant volume of cV, is given by

They note that for atmospheres with a pressure greater than 0.2 atm,

The adiabatic exponent α is known to be

which is not the way this is expressed in the paper.  Note that µN2 cP (N2) is the heat capacity per mole of nitrogen gas and each atmospheric gas component should be handled similarly.  cW + cR is the effective heat capacity of the sum of the water condensation processes and the absorption by infra-red active gases of the incoming solar insolation in the atmosphere.  A decrease in the value of α will cause a temperature decrease at any given altitude in the troposphere and a temperature decrease at the surface.

The value of µ should also be adjusted for additions with a weighted average based on component gas partial pressures as I showed above, though the paper does not present the issue in this way.  Additions of carbon dioxide with a mass of 44 amu increase the overall air µ since N2 has a mass of 28 amu and O2 has a mass of 32 amu, with normal air being about 28.96 amu on average.  So additions of carbon dioxide will decrease α by increasing the average molecular mass.  On the other hand, additions of water vapor (18 amu) or methane (16 amu), both reduce the average air molecular weight, which acts to increase α.  To find the overall effect of a gas component in convection, however, one needs to examine the heat capacity of each gas in terms of its µ cP or its constant pressure heat capacity per mole.

Unfortunately, the paper incorrectly equates specific heat with heat capacity in the discussion.  Specific heats are given in relation to that of water.  While they misuse the term, the results are handled correctly.

More water vapor increases both cW and cR, while an increase in carbon dioxide or methane increases cR.  So α and the temperature are still further reduced by the increased net heat capacity.
The effective temperature of radiative equilibrium with space, Te, is not defined in the paper, but is this:

In addition, the heat in the atmosphere per gram, Q is given as

So, as I have often said, the net warming of the Earth’s surface by infra-red gases is much less than it is claimed to be.  It is about 9.8 K, not about 33 K.  Also, as I have said by other empirical approaches, the effect of adding water vapor to the atmosphere is now a cooling effect, though water vapor is responsible for most of the prior warming due to its role in preventing a direct radiative equilibrium between the surface and space for most of the heat at the surface.  I have also said that adding CO2 has a very small effect on the surface temperature, which is borne out by this paper where CO2 is only responsible for a small portion of the small cR effect and a very small increase of cP.  I have long said that it was not clear that adding CO2 would not decrease the temperature a wee bit.  It now appears clear that just as adding water vapor now decreases the surface temperature, so too does adding either CO2 or methane gas.  This paper I have just discussed shows why additions of the infra-red active (greenhouse) gases now have a net cooling effect upon our troposphere and upon surface temperatures.

There is a warming of the surface by infra-red active gases, the so-called greenhouse gases, but that effect was maximized at lower concentrations of those gases than we now have.  Increases in those gases now cause small decreases in surface and general tropospheric temperatures.  This is because the mean free length for infra-red absorption by these gases is now too short for them to move the upper troposphere radiative equilibrium altitude to higher altitudes in the dense troposphere.  With that space radiation shell at the top of the troposphere relatively stabilized, the increased role of the gases in transporting heat energy upward from the surface means they are stronger coolants than they are “greenhouse” heaters.
Posted by MS at 11:37 AM