Plotting the NOAA ESRL Global Annual  Mean CO2 mole fraction increase (PPM) Data shows a relatively flat trend in the annual increase of CO2 in the atmosphere, with the mean from 1980-2009 (thru 9/09) of 1.65 Parts Per Million (PPM). At this rate, the time required to double CO2 levels from the current 386 PPM to 772 PPM is 234 years. The IPCC and alarmists assume CO2 levels are increasing exponentially, predicting CO2 levels will double as soon as 2050, but that is not what the data over the past 30 years show: 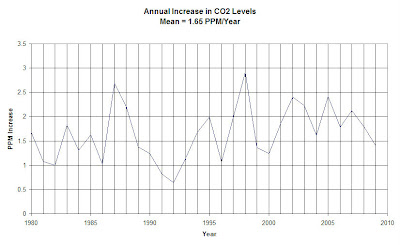 also see the August 2009 paper by Lindzen and Choi which uses satellite data to determine climate sensitivity at 0.5 degrees due to a doubling of CO2 (that's 6 times less than the IPCC best estimate of 3 degrees). And see here.

Shaviv, N.J., 2005. On climate response to changes in the cosmic ray flux and radiative budget. J. Geophys. Res. 110, A08105. see On Climate Sensitivity and why it is probably small