Might it be that Reagan, not Obama, began to slow the rise of the seas?

Global Warming and the Gipper

WSJ.COM 6/6/13: Might it be that it was Ronald Reagan and not Barack Obama who began to slow the rise of the seas? That is one conclusion that could be drawn from a new paper by Canadian physicist Qing-Bin Lu of Ontario's University of Waterloo. Instead of carbon dioxide emissions, Mr. Lu argues that ozone-depleting chlorofluorocarbons (CFCs) and other halocarbons caused global warming. Thanks to the Reagan administration and the 1987 Montreal Protocol, CFCs have been phased out by developed countries. After a lag, Mr. Lu argues that global temperatures peaked around 2002 and predicts they are set to gradually fall over the next five to seven decades.
Upholders of the consensus argue that increased carbon dioxide is the only way to explain rising global temperatures. Now there is a competing explanation, with a chronology that better fits the evidence.
There was always a problem with the CO2-as-cause explanation—how to explain the decline in temperatures from the mid-1940s and relatively flat temperatures until 1975 when carbon dioxide levels were rising all the time. The Intergovernmental Panel on Climate Change (IPCC) did this by arguing that sulfate aerosols resulting from coal-fired power station emissions [recently disproven - the primary source of sulfate aerosols is volcanoes, not man] had a cooling effect that temporarily stopped the rise in temperatures.
There wasn't hard data on aerosols, so assumptions were used that couldn't be checked against reality. To anyone but a climate scientist, it was deeply unsatisfactory—especially as different climate modelers used different values to get similar results. Nonetheless, this was the story line the IPCC developed in its 1995 Second Assessment Report. By contrast, in Mr. Lu's telling, the effect of CFCs on the climate only became significant in the late 1970s (Mr. Lu's analysis suggests there is a delay of about nine years before CFCs reach the upper atmosphere and trap heat radiated from the Earth's surface). 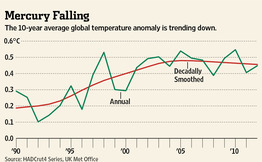 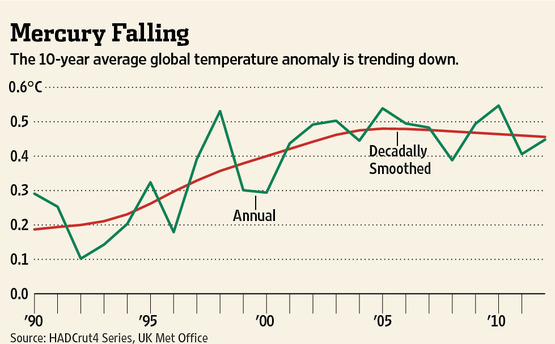 wsj
More recently, reality intruded again. "The climate is warming faster than anybody anticipated five or 10 years ago," President Obama declared last month. Only it hasn't. As shown in the accompanying chart of temperature data from the U.K.'s Met Office, in the first decade of this century, the global average temperature flattened and started to decline, implying a negative correlation between carbon dioxide and temperature for the time being.
In contrast to the poor predictive record of CO2-driven warming, with CFCs it is a different story. According to Mr. Lu, global surface temperature has a "nearly perfect" linear correlation with CFCs and other halocarbons in the atmosphere since 1970. Making careful calculations of the warming effect of halogenated gases, Mr. Lu can reproduce observed temperatures since 1970 and a cooling trend for the past 10 years. But Mr. Lu cannot reconcile the observed temperatures between 1850 and 1970 or the recent cooling using the IPCC's equation for the greenhouse effect of carbon dioxide.
Whether the precise physical mechanism of CFC warming claimed by Mr. Lu is subsequently modified, CFC causation more closely tracks changes in observed temperature. Perhaps climate scientists were suckered: As Mr. Lu notes, from 1970, the rise in halocarbon concentrations has a nearly identical growth shape to that of CO2, but is drastically different from the turn of this century.
Remainder at WSJ.COM
Posted by MS at 7:10 PM