The Carbonated President: Obama unveils a war on fossil fuels he never disclosed as a candidate

Obama unveils a war on fossil fuels he never disclosed as a candidate.

WSJ.COM 6/26/13: President Obama's climate speech on Tuesday was grandiose even for him, but its surreal nature was its particular hallmark. Some 12 million Americans still can't find work, real wages have fallen for five years, three-fourths of Americans now live paycheck to check, and the economy continues to plod along four years into a quasi-recovery. But there was the President in tony Georgetown, threatening more energy taxes and mandates that will ensure fewer jobs, still lower incomes and slower growth. 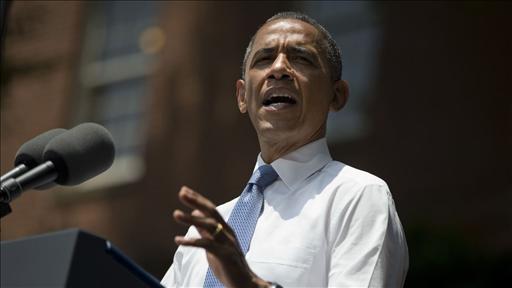 Editorial board member Joe Rago on President Obama’s climate change plan.
Mr. Obama's "climate action plan" adds up to one of the most extensive reorganizations of the U.S. economy since the 1930s, imposed through administrative fiat and raw executive power. He wants to reduce greenhouse gas emissions by 17% by 2020, but over his 6,500-word address he articulated no such goal for the unemployment rate or GDP.

The plan covers everything from new efficiency standards for home appliances to new fuel mileage rules for heavy-duty trucks to new subsidies for wind farms, but the most consequential changes would slam the U.S. electric industry. These plants, coal-fired power in particular, account for about a third of domestic greenhouse gases.
Last year the Environmental Protection Agency released "new source performance standard" regulations that are effectively a moratorium on new coal plants. The EPA denied that similar rules would ever apply to the existing fleet, or even that they were working up such rules. Now Mr. Obama will unleash his carbon central planners on current plants.
Coal accounted for more than half of U.S. electric generation as recently as 2008 but plunged to a mere 37% in 2012. In part this tumble has been due to cheap natural gas, but now the EPA will finish the job and take coal to 0%.
Daniel Shrag of Harvard, an Obama science adviser, told the New York Times Monday that "Politically, the White House is hesitant to say they're having a war on coal. On the other hand, a war on coal is exactly what's needed." At least he's honest, though in truth Mr. Obama's target is all forms of carbon energy. Natural gas is next. 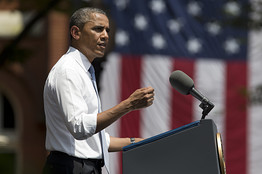 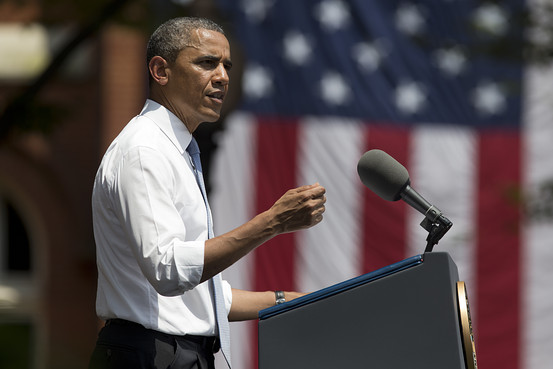 Associated Press
President Obama during a speech on climate change at Georgetown University on Tuesday.
The higher costs will ripple through the energy chain, which is precisely Mr. Obama's goal. Only by artificially raising the cost of carbon energy can he make even heavily subsidized "renewables" competitive.
In general every $1 billion spent complying with an EPA rule threatens 16,000 jobs and cuts GDP by $1.2 billion—and the agency is now writing scores of multibillion-dollar rules. Keep in mind that last month the Administration quietly raised the "social cost" of carbon by 60% in a regulatory filing related to microwave ovens. That means the EPA can jack up costs by 59.99% and still justify them by claiming the higher benefits.
This regressive burden won't merely be borne by average American consumers and utility rate-payers—especially in the Midwest and Southern regions that use the most coal. This also threatens one of the few booming parts of the economy, the energy revolution driven by shale gas and unconventional oil. The return of manufacturing to the U.S. depends on this cheap abundant energy, and it could as easily re-relocate overseas as the U.S. becomes less competitive.
For good measure, Mr. Obama also declared that he will approve the Keystone XL pipeline "only if this project does not significantly exacerbate the problem of carbon pollution." Yet the oil in Alberta won't stay in the ground if Mr. Obama blocks the route to the Gulf of Mexico. It will be shipped by rail and boat to China and elsewhere. The only question is whether America will benefit from this shovel-ready project that will create tens of thousands of jobs.
Speaking of futility, Mr. Obama's ambitions will have no effect on global atmospheric carbon concentrations. Emissions are already falling in the U.S., thanks primarily to the shale gas boom, but emissions are rising in the developing world. Mr. Obama pandered to the climate-change absolutists by saying "We don't have time for a meeting of the Flat Earth Society." But he never explained how his plan will reduce warming, or why climate models have failed to predict the warming slowdown of the last dozen or so years even as more CO2 is pumped into the atmosphere.

Most striking about this Obama legacy project is its contempt for democratic consent. Congress has consistently rejected an Obama-style "comprehensive" anticarbon energy plan. That was true even when Democrats ran the Senate with a filibuster-proof majority in 2009-2010 and killed his cap-and-trade energy bill. The only legislative justification for Mr. Obama's new plan is an abusive interpretation of the Clean Air Act, which was last revised in 1990 and never mentions carbon as a pollutant.
So instead Mr. Obama will impose these inherently political policy choices via unaccountable bureaucracies, with little or no debate. Mr. Obama might have at least announced his war on carbon before the election and let voters have a say. Instead he posed as the John the Baptist of fossil fuels in locales such as Ohio, Pennsylvania and Virginia—taking credit for the shale fracking boom he had nothing to do with and running ads attacking Mitt Romney as anticoal.
Now safely re-elected, Mr. Obama figures he can do what he pleases. The Americans who will be harmed will have to console themselves with 99 weeks of jobless benefits, food stamps and ObamaCare.
Posted by MS at 8:11 AM