Dr. Nils-Axel Mörner is the past chair of the Paleogeophysics and Geodynamics department at Stockholm University in Sweden. Dr. Mörner has just published a peer-reviewed paper showing that the Sun will be in a new major Solar Minimum by the middle of this century, resulting in a new Little Ice Age over the Arctic and NW Europe. Dr. Morner bases his analysis upon solar influences on the Earth's length of day and the cosmic ray theory of Svensmark et al., and finds the analysis provides conclusions "completely opposite to the scenarios presented by the IPCC." 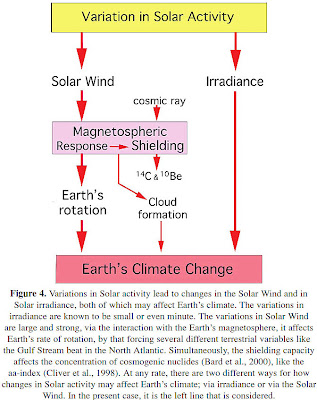 ABSTRACT: At around 2040-2050 we will be in a new major Solar Minimum. It is to be expected that we will then have a new “Little Ice Age” over the Arctic and NW Europe. The past Solar Minima were linked to a general speeding-up of the Earth’s rate of rotation. This affected the surface currents and southward penetration of Arctic water in the North Atlantic causing “Little Ice Ages” over northwestern Europe and the Arctic.

EXCERPTS: At around 2040-2050 the extrapolated cyclic behaviour of the observed Solar variability predicts a new Solar Minimum with return to Little Ice Age climatic conditions.

At any rate, from a Solar-Terrestrial point of view, we will, by the middle of this century, be in a New Solar Minimum and in a New Little Ice Age (Figure 7). This conclusion is completely opposite to the scenarios presented by IPCC (2001, 2007) as illustrated in Figure 3. With “the Sun in the centre”, no other conclusion can be drawn, however.