A paper published today in the Journal of Geophysical Research finds a significant increase in solar brightening and UV irradiance during summer and autumn at seven locations in Spain over the period 1991-2010.

Julia Bilbao et al
This paper proposes a semiempirical method to reconstruct ultraviolet erythemal (UVER) irradiance in the past from total shortwave radiation (SW) and total ozone column (TOC) measurements and has been used to obtain a long-term reconstructed UVER series in central Spain. The method is based on radiative transfer modeling combined with empirical relationships, giving an equation that relates UVER and SW irradiance measurements, solar zenith angle, as well as UVER and SW irradiance values calculated under cloudless conditions. TOC measurements are needed as input for the cloudless modeling. Hourly UVER radiation values have been reconstructed and compared with ground-based measurements for seven Spanish locations. The reconstructed hourly UVER irradiance values are in good agreement with the measurements, showing a determination coefficient between 0.95 and 0.99, and the lowest root mean square errors (rmse) in summer taking values from 5% to 9% in the seven stations. Reconstructed daily UVER doses have been compared for eight stations, showing a better agreement than in the hourly case with rmse values from 3% to 8% in summer and from 4% to 9% when all seasons are taken into account. A reconstructed 10 min UVER irradiance data set from 1991 to 2010 has been calculated using the proposed method for the city of Valladolid. Statistically significant UVER trends appear in summer and autumn when UVER levels increased 3.5% and 4.1% per decade, respectively. Brightening was found for SW measurements in the same period, with a statistically significant trend of 4.4% and 5.8% per decade in summer and autumn. 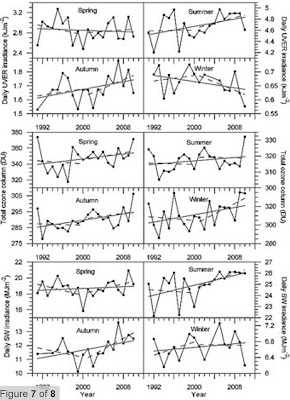