The Keystone pipeline decision is a signal to blue-collar workers that this is no longer their fathers' Democratic Party.

WSJ.com 11/17/11
The decision by the Obama administration to "delay" building the Keystone XL pipeline is a watershed moment in American politics. The implication of a policy choice rarely gets more stark than this. Put simply: Why should any blue-collar worker who isn't hooked for life to a public budget vote for Barack Obama next year?
The Keystone XL pipeline would have created at least 20,000 direct and indirect jobs. Much of this would have been well-paid work for craftsmen, not jobs as hod carriers to repave the Interstate.
On a recent trip to Omaha, Neb., Mr. Obama signaled where his head was on the pipeline during a TV interview: "Folks in Nebraska, like folks all across the country, aren't going to say to themselves, 'We're going to take a few thousand jobs if it means our kids are potentially drinking water that would damage their health." Imagine if he'd been leading a wagon train of workers and farmers across the Western frontier in 1850.
Within days of the Keystone decision, Canada's prime minister, Stephen Harper, said his country would divert sales of the Keystone-intended oil to Asia. Translation: Those lost American blue-collar pipeline jobs are disappearing into the Asian sun. Incidentally, Mr. Harper has said he wants to turn Canada into an energy "superpower," exploiting its oil, gas and hydroelectric resources. Meanwhile, the American president shores up his environmental base in Hollywood and on campus. Perhaps our blue-collar work force should consider emigrating to Canada.
Recall as well the president's gut reaction in 2010 to the BP Gulf oil spill: an order shutting down deep-water drilling in U.S. waters. The effect on blue-collar workers in that industry was devastating. Writing in these pages this week, Alaska GOP Sen. Lisa Murkowski described how Mexico, the Russians, Canada and even Cuba are moving to exploit oil and gas deposits adjacent to ours, while the Obama administration slow-walks new drilling permits. 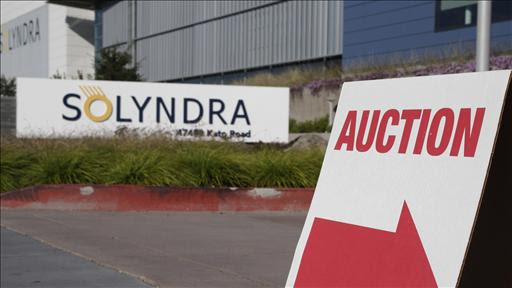 Wall Street Journal columnist Dan Henninger argues that President Obama is leaving private sector workers out to dry on Opinion Journal. Photo: AP.
No subject sits more centrally in the American political debate than the economic plight of the middle class. Presumably that means people making between $50,000 and $175,000 a year. The president fashions himself their champion.
This surely is bunk. Mr. Obama is the champion of the public-sector middle class. Just as private business has become an abstraction to the new class of public-sector Democratic politicians and academics who populate the Obama administration, so too the blue-collar workers employed by them have become similarly abstracted.
You would think someone in the private labor movement would wake up and smell the tar sands. Last week's Big Labor "victory" in Ohio was about spending tens of millions to support state and local government workers. Many union families attached to the state's withering auto plants no doubt voted with their public-sector brothers in solidarity. But why? Where the rubber hits the road—new jobs that will last a generation—what does this public-sector vote do for them?
Many farmers, ranchers and timber workers went Republican years ago over an increasingly ideological and uncompromising Democratic environmentalism that was wrecking their livelihoods. Now the same thing is happening to blue-collar workers. Mr. Obama from his first days made clear his hostility to carbon production. At best he views much of the private blue-collar work force as carbon enablers for whom he himself will create a new harmony of "green" industries. That would be Solyndra.
Solyndra isn't just a fiasco. It's a clear warning that launching new industries onto the big muddy of massive public subsidies is fraught with economic and political problems. 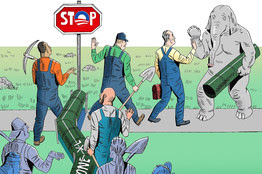 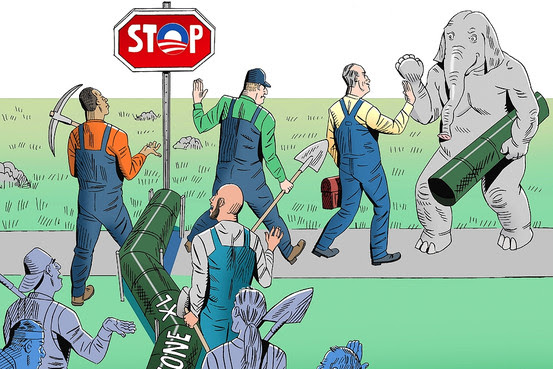 Martin Kozlowski
The Democratic promise to private blue-collar workers has been that the party would use its clout to in effect "manufacture" new jobs out of public budgets—high-speed rail projects, school construction and the like. But surely that's gone aglimmering.
Wisconsin, Ohio, New Jersey, New York and California—whose blue-collar families traditionally hand those states to Democratic candidates—are all locked in budgetary death struggles to pay for their public workers. That conversation is about generations-long budget commitments. There isn't going to be anything large left over for "public-private" job schemes.
There's little hope that anyone in the leadership of the traditional union movement, public or private, would entertain a rethinking of their historic ties to the Democratic Party. But younger workers should. The economic crisis of the past two years is no blip. In some construction unions, unemployment is well over 25%. The only force out there that can create real jobs over the longer term is the strongest private economic growth the U.S. can muster. The past three years of a Democratic administration's economic policies have the U.S. mired in a growth rate rotating like a forgotten flywheel around 2%.
America's workers, no matter the color of their collars, desperately need a higher economic growth rate than decisions such as the delay on Keystone are going to give them. The Keystone shuffle should make clear to many middle-class workers that this is no longer their fathers' Democratic Party. It's going in a different direction, toward the clouds. This may be the year to open negotiations with the alternative.
Posted by MS at 11:18 AM