New paper shows no correlation between CO2 and rainfall

Another tenet of AGW theory bites the dust in the face of real-world data: AGW theory proposes that increased CO2 levels lead to increased water vapor in the atmosphere (despite empirical data which shows the opposite) and therefore supposedly lead to increased rainfall in most regions. A paper published today in the Nature Climate Change February 2012 edition studied rainfall over the Indian subcontinent 1813-2006 and finds rainfall has decreased since the 1930s as CO2 emissions markedly increased with industrialization. The data instead shows a natural, cyclical variability in mean annual rainfall that peaked in the 1870s and 1930s with absolutely no correlation to levels of CO2. 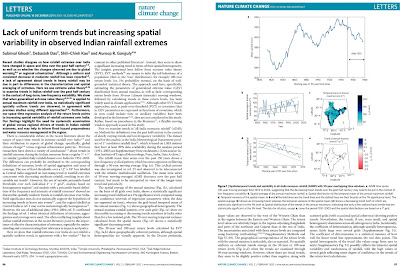 [No link available to full paper]
Posted by MS at 5:42 PM