Plant-Zone Map a Boon to Growers

The U.S. Department of Agriculture released a new map of the nation's growing zones Wednesday that confirms what many gardeners and farmers already know: Winters are warmer.
The map—widely used as a guide to what areas are suitable for a plant—is divided into zones based on the average lowest winter temperature, in 10-degree increments. Many of the areas that shifted into a warmer zone are in the Northeast, and many were on the edge of a warmer zone in the previous map, released in 1990, said Kim Kaplan, an Agriculture Department spokeswoman. 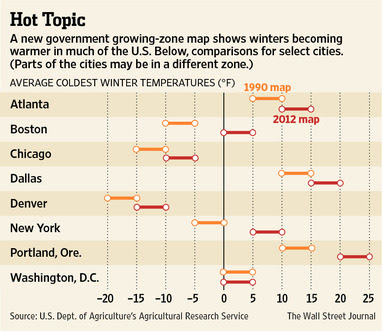 Large cities in particular are having warmer winters, which the department said may be due to more "heat islands" created by asphalt and concrete. Much of Boston and New York is one zone warmer in the new map.
The Agriculture Department made clear that it doesn't ascribe the trend to climate change. The 30 years of weather data used to create the map weren't sufficient to smooth out weather cycles and determine if there is any underlying climate change, Ms. Kaplan said.
In addition, the agency said the methodology used to build the new map was more sophisticated than that for the 1990 version, so the maps aren't directly comparable. The new map relies on data from 8,000 weather stations and also takes into account topography, prevailing wind, elevation, proximity to large water bodies and other factors not used to create the 1990 map.
"The map is simply not a good instrument to demonstrate [climate change]," Ms. Kaplan said in a news conference.
David Wolfe, a Cornell University professor who studies climate change, said he "would not be so cautious as they were in their statements." In isolation, the new map "doesn't prove climate change" but when combined with other observations, including shifts in animal migration patterns, changes in snow cover and other temperature readings, it "corroborates evidence" of such a change, he said.
In 2003, an updated growing-zone map sponsored by the Agriculture Department similarly showed winters getting warmer. The agency pulled back the map amid a debate about whether it reflected climate change; the agency denied it did. On Wednesday, Ms. Kaplan said the map was rejected because it used outdated methodology and wasn't suited for Web access.
The map, which is consulted by gardeners, plant wholesalers and farmers as well as crop insurers and scientists, is based on the average annual coldest temperature in each of 13 zones—up from 11 zones in the 1990 map due to the addition of several warm-climate zones. The horticulture industry rates plants according to what zone they will survive in over winter.
The map, at www.planthardiness.ars.usda.gov, allows users to find the zone for an area representing as little as half a mile, a much finer gradation than that available on the 1990 map.
Warmer weather already is affecting agriculture. Cotton, traditionally a Southern crop, is moving north into Kansas. The Midwest corn-growing region has expanded north and west into South Dakota and North Dakota, and even into Manitoba, displacing less profitable crops such as wheat. The shift is boosting seed companies such as Monsanto Co. and the Pioneer Hi-Bred unit of DuPont Co. because it allows them to sell more corn seed, their most profitable type.
Posted by MS at 3:40 PM