IEA: US set to become world's largest oil producer by 2020 & energy independent by 2030

LONDON—A shale oil boom means the U.S. will overtake Saudi Arabia as the world's largest oil producer by 2020, a radical shift that could profoundly transform not just the world's energy supplies, but also its geopolitics, the International Energy Agency said Monday. 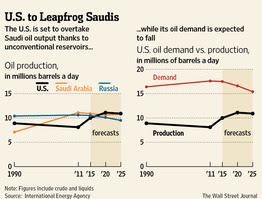 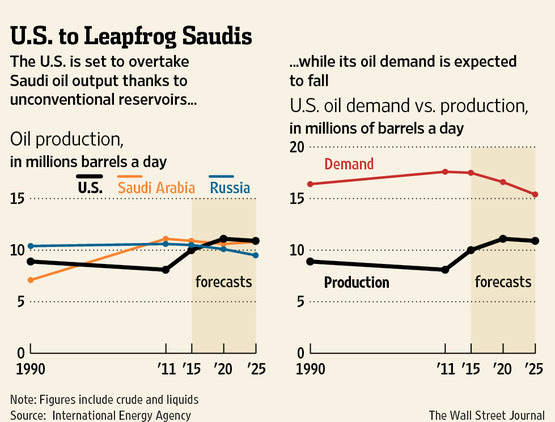 In its closely watched annual World Energy Outlook, the IEA, which advises industrialized nations on their energy policies, said the global energy map "is being redrawn by the resurgence in oil and gas production in the United States."
The assessment is in contrast with last year, when it envisioned Russia and Saudi Arabia vying for the top position.
"By around 2020, the United States is projected to become the largest global oil producer" and overtake Saudi Arabia for a time, the agency said. "The result is a continued fall in U.S. oil imports (currently at 20% of its needs) to the extent that North America becomes a net oil exporter around 2030."
This major shift will be driven by the faster-than-expected development of hydrocarbon resources locked in shale and other tight rock that have just started to be unlocked by a new combination of technologies called hydraulic fracturing.
According to Washington's Energy Information Administration, U.S. oil production has increased 7% to 10.76 million barrels a day since the IEA's last outlook a year ago. The agency's conclusions are partly backed by the Organization of the Petroleum Exporting Countries, which last week acknowledged for the first time that shale oil would significantly diminish its share of the U.S. market.
The group said the U.S. would import less than 2 million barrels a day in 2035, almost three-quarters less than it does today. That is not to say OPEC's role will be marginalized globally. The group's share of global production will increase from 42% today to 50% in 2035, with much of it going to Asia, according to the IEA.
The IEA hinted that newly found U.S. energy independence could redefine military alliances, with Washington being replaced by Asian nations as those needing to secure oil shipping lanes.
"It accelerates the switch in direction of international oil trade towards Asia, putting a focus on the security of the strategic routes that bring Middle East oil to Asian markets," it said. Some in the U.S. are already questioning the reasons for keeping U.S. warships in the Persian Gulf. "It's insane that we have the Fifth Fleet of the U.S. Navy tied up there to protect oil that ends up in China and Europe," T. Boone Pickens, chief executive of energy-focused hedge fund BP Capital Management, was quoted as saying last week in U.S. magazine Parade.
The IEA also warned that the emergence of shale gas as a game changer in global energy has a downside risk, contributing to increased competition for water resources needed for energy projects.
Shale oil and gas are extracted by pumping water, sand and chemicals into the ground at high pressure to crack rocks open, a process known as hydraulic fracturing, or "fracking." But the intensive use of water, "will increasingly impose additional costs," and could "threaten the viability of projects" for shale oil and gas, and biofuels, the agency said.
Posted by MS at 7:12 AM