The proposed EPA patchwork regulations on CO2 emissions vary considerably state by state from less than 20% reduction to more than 60% reduction for the state of Washington. Arizona and South Carolina would be required to reduce CO2 emissions by 51-60%. Many states including Texas, Florida, Illinois, Wisconsin, Michigan, Pennsylvania, Maryland, and Massachusetts would have to reduce CO2 by 31-40%. The costs will be disproportionately large burdens for these states and some have suggested may be unconstitutional. 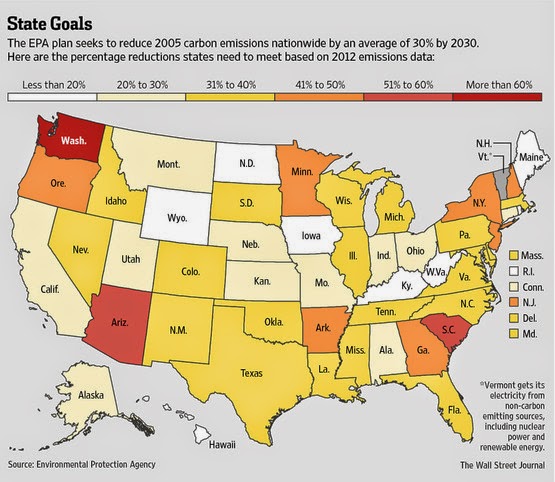 WASHINGTON—President Barack Obama's plan to reduce carbon emissions is escalating environmental policy fights in energy-rich states, home to many of the marquee races that could determine which party controls the Senate after November's elections.

Democrats running in conservative-leaning states in Appalachia and other energy-producing areas quickly distanced themselves from the draft rule released Monday by the Environmental Protection Agency. The proposal aims to reduce carbon emissions from fossil fuel-fired power plants by an average of 30% from 2005 levels by 2030.

"When I'm in the U.S. Senate, I will fiercely oppose the president's attack on Kentucky's coal industry, because protecting our jobs will be my No. 1 priority," said Democrat Alison Lundergan Grimes, the Kentucky secretary of state, who is challenging Senate Minority LeaderMitch McConnell (R., Ky.) in one of the year's most expensive races.

Even in areas less dominated by coal, vulnerable Democrats criticized Mr. Obama for acting without congressional approval to advance his agenda. They sought to do so carefully to avoid alienating the party's base, which generally supports efforts to combat climate change.

Republicans, who face little political risk from criticizing the president, labeled the proposed rule a job-killing reward to his environmental donors and a new "energy tax" that would drive up electricity prices.

"The president's plan is nuts," House Speaker John Boehner (R., Ohio) said in a statement, reflecting a GOP consensus that the rule would inhibit job creation and economic growth.

The plan elicited the most heated attacks in Appalachian states, including Kentucky and in West Virginia, where a coal miner appears on the state flag. But even when Democrats criticized the president's plan, Republicans worked to tie their rivals to Mr. Obama.

Democratic state Secretary of State Natalie Tennant, who is running to replace the retiring Sen. Jay Rockefeller (D., W.Va.), vowed to work to block the plan.

Her GOP rival, Rep. Shelley Moore Capito, who also opposes the proposed regulations, stressed Ms. Tennant's past support for the president in a call with reporters Monday.

Ms. Tennant "has been very positive about him in terms of leading the country, and we very much differ in terms of that," she said.

Other Democrats in conservative-leaning states proposed taking legislative action to block the EPA from implementing the rule.

Rep. Nick Rahall (D., W.Va.), running for re-election in a conservative-leaning district, said Monday he would introduce a bill aimed at scuttling the proposal and preventing the government from issuing any similar rules without congressional approval for at least five years.

"There is a right way and a wrong way of doing things, and the Obama administration has got it wrong, once again," Mr. Rahall said in a statement.

Mr. McConnell has also said he plans to introduce legislation seeking to block the rule, though it stands little chance of advancing in the Democratic-controlled Senate.

The EPA proposal also is expected to stoke efforts by vulnerable Democrats to distance themselves from the president in other battleground Senate states, including Alaska and Louisiana.

"While it is important to reduce carbon in the atmosphere, this should not be achieved by EPA regulations," said Sen. Mary Landrieu, a Louisiana Democrat running for re-election.

Even before the EPA announcement, Ms. Landrieu was airing a TV ad touting her commitment to building the Keystone XL pipeline, and Sen. Mark Begich (D., Alaska) reminded voters in his own ad that he supports more oil drilling in the Arctic.

Some Democrats in tight races sought to avoid antagonizing the party's base voters, who are particularly important in midterm elections, when turnout is often lower.

Her calculus is that voters will welcome an environmental push after coal ash spilled into the state's Dan River in February.

Still, Ms. Hagan, who is being challenged by North Carolina Republican state House speaker Thom Tillis, said she expected to ask for changes after reviewing the rule.

Republicans were quick to note Monday that Mr. Obama's latest push to rein in carbon emissions has strong support among Democratic donors, including California environmentalist Tom Steyer, who is helping to fund candidates who oppose the Keystone construction.

Democrats in secure seats hailed what they called a landmark step in combating global warming.

"Thank goodness the president refuses to be bullied by those who have their heads in the sand, and whose obstruction is leading us off the climate change cliff," said Sen. Barbara Boxer (D., Calif.).
Posted by MS at 10:23 AM