A paper published today in the journal Nature Geoscience studies changes in the intertropical convergence zone (ITCZ) over the western Pacific during the Little Ice Age. The paper is co-authored by skeptics Willie Soon and Robert M. Carter, and is yet another example of the high quality, peer-reviewed work on natural climate variability and potential solar-climate relationships being published in highly respected journals by CAGW skeptics such as Dr. Soon.

Unable to attack on a scientific basis anything Dr. Soon has published in peer-reviewed journals, smear-mongerer Gavin Schmidt of NASA/GISS instead told the NYT, “The science that Willie Soon does is almost pointless.” Schmidt thus claims it is "pointless" to study natural variability, solar-climate relationships, and hundreds of potential solar amplification mechanisms published in the peer-reviewed literature, effectively because Schmidt & his falsified climate models have already made their mind up that man-made CO2 is the climate control knob & the sun plays a "pointless" role in climate. 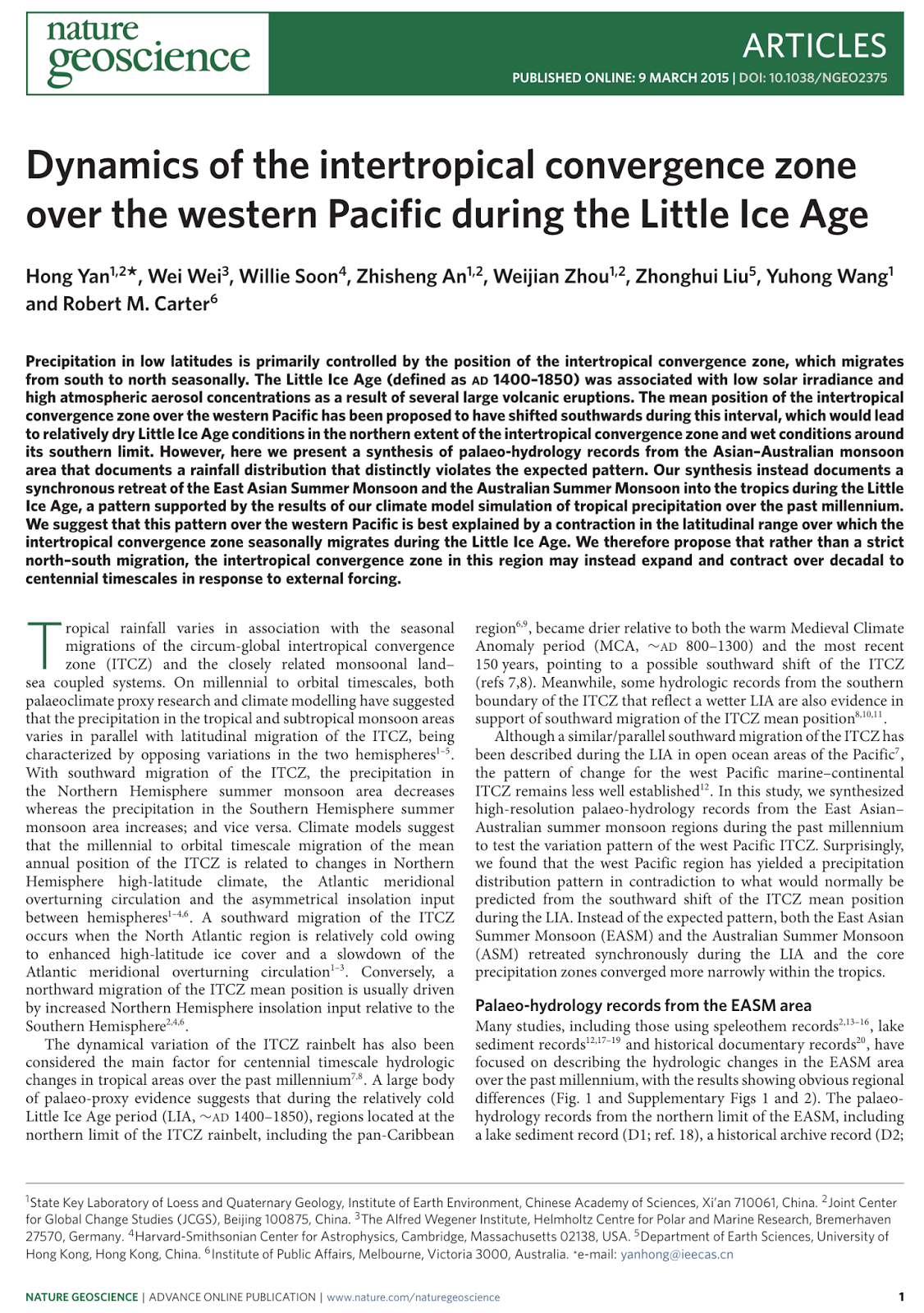 Note: Other papers have linked shifts in the ITCZ to solar activity and the bipolar seesaw theory of (natural) climate change.

A new paper has been published in Nature Geoscience entitled ‘Dynamics of the intertropical convergence zone over the western Pacific during the Little Ice Age ’ by Hong Yan of the Institute of Earth Environment, Chinese Academy of Sciences and an international team of co-authors from the Alfred Wegener Institute (Wei Wei), Harvard-Smithsonian Center for Astrophysics (Willie Soon), Institute of Earth Environment (Zhisheng An, Weijian Zhou and Yuhong Wang), University of Hong Kong (Zhonghui Liu) and Institute of Public Affairs (Robert M. Carter). The results of the research indicate that both the East Asia Summer Monsoon and the Northern Australia Summer Monsoon retreated synchronously during the recent cold Little Ice Age in response to external forcings such as solar irradiance variation and possibly large volcanic eruptions.

The Asia-Australia monsoon covers the world’s most populated areas, and therefore understanding the factors that control monsoon-belt climatic variation through time is important for response-planning for healthy social-economic development for the globe. Many previous studies have focused on the past climate changes in the Asia-Australia monsoon area, often proposing that the western Pacific Intertropical Convergence Zone (ITCZ) or the associated rainbelt should have migrated southward during cold climate episodes, such as the Little Ice Age (AD 1400-1850). Such migrations should be associated with the occurrence of a weaker East Asian Summer Monsoon and a stronger Australian Summer Monsoon, with opposing rainfall variations between the two hemispheres.

However, hydrological records from the Asia-Australia summer monsoon area, analysed by Professor Hong Yan and his coauthors, show that southward migration of the ITCZ did not occur during the cold Little Ice Age. Instead, the hydrological data support the operation of a new dynamic mechanism named ‘ITCZ/Rainbelt contraction’ in the Western Pacific region during the Little Ice Age.

Prima facie, a southward migration of the ITCZ should result in less precipitation in the East Asia Summer Monsoon area but more rainfall in Australia Summer Monsoon area. In contrast, the Synthesis of a large set of palaeoclimatological records from across the monsoonal area establishes that the precipitation in both continental East Asia and northern Australia decreased synchronously during the Little Ice Age. The unusual spatial variation in paleoclimate records therefore documents a distinctly different rainfall pattern that violates the former expectation of ITCZ southward migration. Furthermore, comparison of these results with solar records indicates that a relationship exists between the rainfall changes and Total Solar Insolation.

To explain these changes, the scientists propose an alternative dynamic scenario which they have tested using process-based climate modeling. Rather than strict north-south migration, the multi-decadal to centennial change for the western Pacific Intertropical Convergence Zone can excitingly be shown to have contracted or expanded in parallel with solar irradiance variations. This new understanding clearly adds to the richness of mechanisms by which the Earth climate system can vary naturally and significantly over periods between a few decades and up to a century in length.

Analysis: Solar activity & ocean cycles are the 2 primary drivers of climate, not CO2

How climate models dismiss the role of the Sun in climate

How climate models dismiss the role of the Sun in climate change [Part 4]
Posted by MS at 10:59 AM