A paper published online today in the Journal of Geophysical Research, Atmospheres lends credence to the cosmoclimatology theory of Svensmark et al, finding that increases in galactic cosmic ray counts (GCRs) have a statistically significant correlation to increased cloud formation.
The theory of cosmoclimatology explains why small changes in total solar irradiance (TSI) during solar cycles may be amplified due to secondary effects on galactic cosmic rays and cloud formation: 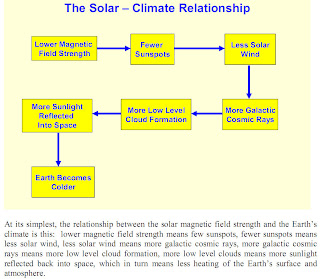 Even though solar irradiance only changes about .1% during a solar cycle, the secondary effects of changes in the solar magnetic field on GCRs can be up to 25% or more: 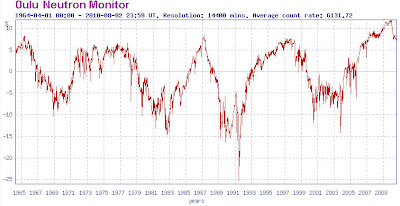 As proven empirically by the study published today, increases in GCRs seed more clouds which reflect more sunlight back into space ("albedo") and result in cooling of the earth. The study published today finds that a 15% increase in GCRs resulted in up to a 9% change in the "cloud index" which corresponds to an increase in cloud opacity. Dr. Roy Spencer illustrates the magnitude of poorly-understood cloud effects on the global climate system in his new book,

The most obvious way for warming to be caused naturally is for small, natural fluctuations in the circulation patterns of the atmosphere and ocean to result in a 1% or 2% decrease in global cloud cover. Clouds are the Earth’s sunshade, and if cloud cover changes for any reason, you have global warming — or global cooling.

Given the potential magnitude of these effects, there is no reason to infer that changes in trace "greenhouse" gases such as CO2 have had any effect on the climate.


Abstract: The cloud index (CI), the cloud occurrence frequency (Occ), and the extinction data (Ext) of the Michelson Interferometer for Passive Atmospheric Sounding instrument on board Envisat (MIPAS-E) from July 2002 to March 2004 are used to investigate a possible link between galactic cosmic rays (GCRs) and midaltitude and high-altitude clouds (CI, Occ: 9–18 km, Ext: 12–24 km). The zonally averaged data with 3 km vertical resolution are averaged over six major Forbush decrease (FD) events and subsequently correlated with the Climax neutron monitor data (CNM). In order to allow for nucleation and growth of ice particles, time lags from 0 to 5 days are applied. We find several weak but statistically significant correlations with an excess of positive cloud-GCR correlations. Introducing a time lag does not enhance the correlations significantly. Subdividing the data in a global grid with 30° × 90° × 3 km resolution shows higher correlations in some regions. The investigation of the individual FD events yields a heterogeneous picture. Overall, there is a weak tendency toward a positive cloud-CNM correlation. A Kolmogorov-Smirnov test shows that for time shifts from 0 to +5 days a weak GCR-cloud effect is evident in the MIPAS-E measurements. An estimation of the impact of this effect delivers that a 15% increase in CNM would result in a small decrease in CI (corresponding to an increase in cloud opacity) which is most pronounced at 9 km altitude (−9% to +0.5%). For log(Ext) a decrease of −5 to 0% is calculated at 12 km altitude which shifts toward weak positive values at higher altitudes.

Related: Svensmark's latest paper and accompanying article
article noting how feedbacks amplify solar variation and high variability of UV up to 8%
Posted by MS at 9:29 AM