Political venture capital turns out to be a loser.

WSJ.COM  12/28/12: Silicon Valley's investment wizards are fleeing the so-called green economy, and not a moment too soon for American prosperity. As painful as the era of enviro-investing has been for taxpayers and shareholders, there's an emerging silver lining. It's likely that in 2013 fewer people will spend their time trying to turn political projects into companies.
A recent survey from our corporate cousins at Dow Jones VentureSource and the National Venture Capital Association finds that "clean technology" is inspiring pessimism among venture capitalists. Fully 61% expect less clean-tech investment in 2013 compared to 2012. On the flip side, a majority expect more investment next year in business information technology, a traditional U.S. economic strength. 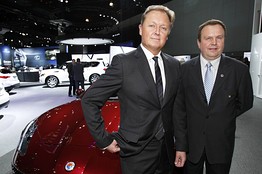 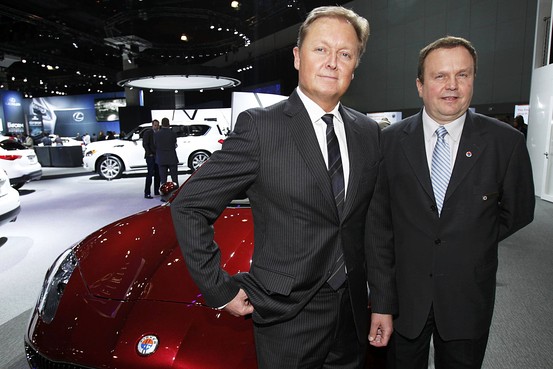 Fisker Automotive co-founder Henrik Fisker, left, and CEO Tony Posawatz in Los Angele in November.
The survey reflects a natural and healthy shift in Silicon Valley. Talent and resources are moving back to the technologies that gave the valley its name—and away from trendy eco-projects that failed.
When Silicon Valley was committed to addressing market needs, it enriched the world with Intel, Apple, Google and Cisco. When venture investors tried to profit from political agendas, they saddled taxpayers with stinkers like Abound Solar, Range Fuels and the infamous Solyndra, which went bust last year after receiving more than half a billion dollars in federal loans.
Success has proven elusive even for the smartest guys in the solar-heated room. Five years after Al Gore joined the prestigious venture-capital firm Kleiner Perkins to back environmentally correct companies, the collaboration has yielded few successful exits for Mr. Gore and his partners, along with some spectacular disasters.
This week brought further embarrassment for a Kleiner-backed and taxpayer-subsidized project called Fisker Automotive. In an interview with Delaware's News Journal, the head of the state's economic development office, Alan Levin, discussed the $21.5 million that was provided by the state in return for a Fisker promise to build green cars there. "All we want are the jobs or our money back," Mr. Levin told the newspaper.
Fisker, an electric-car maker, is currently not making any cars due to various design and production problems. Last year the Department of Energy stopped lending money to Fisker after the company missed development deadlines, but federal taxpayers were already on the hook for more than $190 million. Fisker's problems have lately been exacerbated by the October bankruptcy of a key supplier, A123 Systems, which also received federal loans.
Last week another green company backed by Kleiner, Glori Energy, withdrew its plans for an initial public offering (IPO), blaming poor market conditions. Perhaps Glori will be able to go public next year, and IPOs are a great way for venture investors to cash out of an investment, but Kleiner has enjoyed very few of them in its clean-tech portfolio.
And what appeared to be a true success earlier this year is looking, well, less so. On Wednesday the Journal pronounced Enphase Energy, a Kleiner-backed company that went public in March, the worst IPO of the year. Shareholders who bought at the opening lost about half their money in nine months. The shares of Kleiner-backed Amyris Inc., a biomass company, have lost more than 80% of their value since the firm's 2010 IPO.
VentureSource counts more than 60 companies engaged in "clean tech" that have received investments from Kleiner Perkins. Kleiner calls its environmental investments "greentech" and says that among the green firms receiving Kleiner equity investments, three have been acquired or merged into other companies. The assets of another company were sold. But since Mr. Gore joined up in 2007, Enphase and Amyris are the only two Kleiner green companies to go public, and their performance doesn't leave investors begging for more.
Their rough ride might be among the reasons that another green energy firm, SolarCity, offered shares at its recent public debut about 40% below the expected price. Yuliya Chernova of Dow Jones VentureWire reports that "solar investors lost massive amounts of money over the past two years by betting on manufacturers that overbuilt factories and saw prices for their products fall." She quotes a fund manager who notes that "there aren't a lot of people going to investment committees saying, 'This one is different.'"
Back at Kleiner, the biggest headaches probably don't come from the ones that have gone public, but from the green ventures that haven't yet been sold to other investors. Among the biggest in that category is Fisker. Kleiner and other investors have sunk more than $1 billion into the firm, a huge sum by the standards of venture capital, which has traditionally funded small start-ups.
Like many venture firms, Kleiner doesn't disclose much detail about its investments, and the firm says that information on investment returns is confidential. In a recent interview with the Journal, Kleiner partner John Doerr said that the revenues of companies in Kleiner's green portfolio are rising rapidly. But it's not clear where Kleiner will generate green home runs to offset struggling firms like Fisker.
Mr. Doerr made another claim in his Journal interview: "Our green investing doesn't depend on government policies. It's about basic supply and demand."
If even Al Gore's partner John Doerr is now on record questioning the need for government assistance, we'd say it's well past time for Washington to turn off the subsidy spigot. Many of the potential beneficiaries are already moving on to more worthwhile pursuits.
Posted by MS at 5:05 PM