A paper published today in Quaternary Science Reviews reconstructs the size of four glaciers in Alaska over the past 1500-2000 years. For each of the four glaciers, the authors find the termination point at the end of the record in the late 20th century was approximately the same as during the Medieval Warm Period ~1,000 years ago. According to the paper, the data "supports solar irradiance as the primary pacemaker for centennial-scale fluctuations of mid-latitude valley glaciers prior to the 20th century." The authors find all four glaciers advanced during the Little Ice Age, which was the coldest period of the past 10,000 years, and have regressed during the recovery from the LIA to termination points similar to those during the Medieval Warm Period. 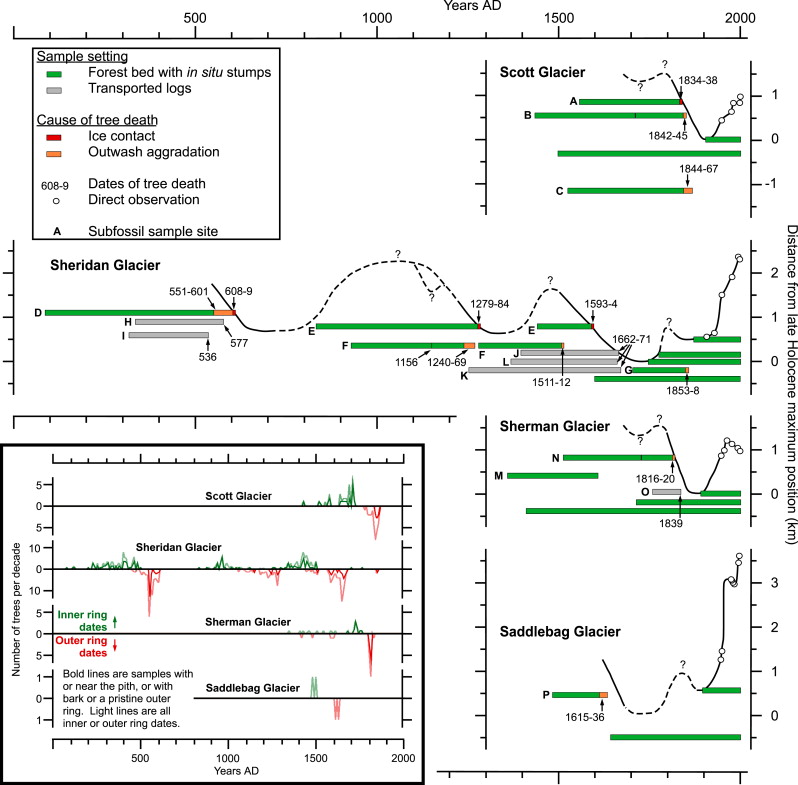 Fluctuations of four valley glaciers in coastal south-central Alaska are reconstructed for the past two millennia. Tree-ring crossdates on 216 glacially killed stumps and logs provide the primary age control, and are integrated with glacial stratigraphy, ages of living trees on extant landforms, and historic forefield photographs to constrain former ice margin positions. Sheridan Glacier shows four distinct phases of advance: in the 530s to c.640s in the First Millennium A.D., and the 1240s to 1280s, 1510s to 1700s, and c.1810s to 1860s during the Little Ice Age (LIA). The latter two LIA advances are also recorded on the forefields of nearby Scott, Sherman and Saddlebag glaciers. Comparison of the Sheridan record with other two-millennia long tree-ring constrained valley glacier histories from south-central Alaska and Switzerland shows the same four intervals of advance. These expansions were coeval with decreases in insolation, supporting solar irradiance as the primary pacemaker for centennial-scale fluctuations of mid-latitude valley glaciers prior to the 20th century. Volcanic aerosols, coupled atmospheric-oceanic systems, and local glacier-specific effects may be important to glacier fluctuations as supplemental forcing factors, for causing decadal-scale differences between regions, and as a climatic filter affecting the magnitude of advances.
Posted by MS at 5:49 PM