According to solar experts, the "general consensus is that we’ve passed the peak" of the current ~11-year solar cycle. If solar geomagnetic activity has also peaked for the current solar cycle, the Ap index of geomagnetic activity declined about 66% so far at solar maxima over the past three solar cycles. The Ap index is one of many indicators of solar activity including total solar irradiance, sunspots, radio flux, and several others, and has particular relevance to the Svensmark cosmic ray theory of climate.

A Solar Show With Mixed Reviews 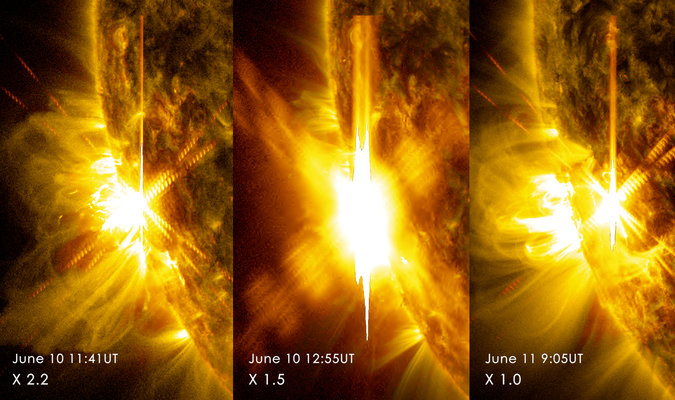 Three X-class solar flares, the most powerful type, erupted June 10 and 11. The images are from NASA’s Solar Dynamics Observatory. CreditImage by NASA/SDO, via Goddard

Indeed, the maximum — the peak of the 11-year sunspot cycle, when the sun erupts with solar flares and energetic bursts of electrons and protons — may have already passed.

As solar maximums go, this has been a tepid one, particularly when measured against some predictions that it would be ferocious; it has been called a “minimax.”

But neither does it rival a quiet period in the second half of the 1600s that coincided with the onset of the Little Ice Age, a prolonged chill in Europe.

“This cycle is not abnormally small,” said W. Dean Pesnell, the project scientist for NASA’s orbiting Solar Dynamics Observatory. Of the 24 solar cycles since the mid-1750s when people began keeping detailed counts of sunspots, “it looks like fifth smallest,” he continued. “It might be the fourth. It might be the sixth. It’s not going to be at the bottom.”

The sun erupted with several giant solar flares last month but has been mostly quiet the past two weeks.

But he added that some of the biggest solar storms in history occurred on the downward side of the solar cycle, and even a weak cycle can generate ferocious outbursts.

“I think the expectation right now is we might see another burst of this activity five or six months from now,” Dr. Young said. “We might still have some big events.”

Perhaps more than anything else, the current maximum has taught solar scientists that they have a lot more to learn about the sun.

In 2006, at the end of the previous solar cycle, Mausumi Dikpati, a scientist at theNational Center for Atmospheric Research in Boulder, Colo., undertook an ambitious endeavor — a computer model using the basic physics of the sun to forecast what would happen next. Her model made two main predictions: The cycle would start slowly, and it would be a big one, one-third to one-half stronger than the last one.

Her first prediction came to pass. The lull stretched for four more years, leading to some speculation that the sun was on the cusp of another Maunder Minimum, the sunspotless era of the 1600s.

(Although the Maunder Minimum coincided with the Little Ice Age, it is not known whether the intensity of a sunspot cycle could influence the earth’s climate. The difference in the amount of the earth-warming radiation coming from the sun between solar minimum and solar maximum is minuscule.)

But her second prediction was wrong.

In part, that was because the model did not capture the sun’s split personality this time around. The sunspots peaked first in the sun’s northern hemisphere, in 2011, and then faded away, leading to an intermission when the sun was almost blank at what was supposed to be maximum. Solar physicists expected that the southern hemisphere would belatedly perk up, and last fall it did, producing a second peak that was larger than the first.

“This was very unusual,” Dr. Dikpati said. “If they would have overlapped, it would have been a strong cycle.”

Dr. Dikpati and Dr. Pesnell were members of a panel that was to come up with a consensus prediction in 2007 but could not. The panel instead split, some agreeing with Dr. Dikpati on a strong maximum. Others, including Dr. Pesnell, expected a weak maximum, based on other indicators like the strength of the magnetic fields near the poles at solar minimum.

“That one worked pretty well,” Dr. Pesnell said. “But now we’ll get in a room and harrumph for a while.”

They will have more data to think about. Convection within the sun moves gases from the equator toward the poles, and many solar scientists think the speed of that flow helps determine the strength of the sunspot cycle.

“We’re getting better, and we argue,” he said. “That’s how we do science.”

The accumulated solar energy [sunspot time-integral] continued to increase until the end of the 20th century along with global temperature, and then both started to decline after peaking in ~2000.