'Hottest Year Ever' Update: Record number of Manatees Died in 2010 from Cold Water

As reported on NBC Nightly News 12/6/10, a record number of manatees died in 2010 due to unusually cold water.

According to Katie Tripp, Ph.D., Director of Science and Conservation, SaveTheManatee.org: 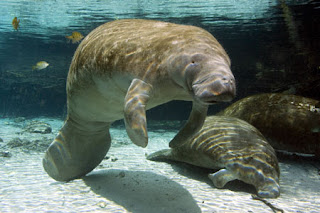 "Through November 19th [2010], 685 manatees have been confirmed dead in the state of Florida, representing more than 13% of the species’ estimated minimum population. This far surpasses the record of 429 deaths set in 2009, and there is still one month left in the year. Although 2010 started with ideal conditions that allowed a record number of manatees to be counted during the annual aerial survey (5,076), the same cold weather that facilitated the count began causing unprecedented levels of mortality in the subsequent weeks. In total, nearly 400 manatees are believed to have died from this lingering event, shattering the previous record of 56 cold-related deaths. In addition, several dozen manatees suffering from cold stress were rescued around the state. Although cold-related deaths are considered a natural cause, the events of this winter highlight the vulnerability of our state’s manatee population, and reinforce the importance of safeguarding winter habitat and minimizing human-related threats to this species."