Warmists have it both ways: warming causes more cooling, or not


The overall warming of the earth’s northern half could result in cold winters… Recent severe winters like last year’s or the one of 2005-06 do not conflict with the global warming picture, but rather supplement it.

However, the Intergovernmental Panel on Climate Change boldly predicted in 2007 that Europe and most other regions were "likely" to "very likely" to have milder winters with fewer and shorter cold spells and cold extremes (see page 862 table 11.2): 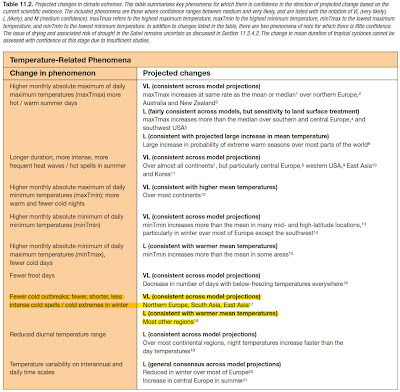 adapted from Andrew Bolt
Posted by MS at 12:20 PM